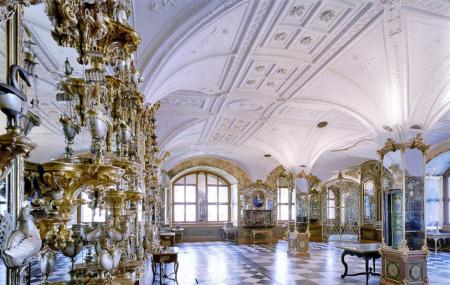 With a collection of treasure that would put Uncle Scrooge to shame, the Schloss und Grunes Gewolbe is one of the most magnificent sights to see in Europe. It’s known as one of the richest treasure chambers in the continent and the collection is so diverse and abundant that one would get confused at what to look at first. It is located on the first and second floors of the Dresden Castle. This museum is both fascinating and unique, and essential on every tourist’s itinerary.

The chambers column bases and capitals were once painted malachite green, thus giving it its title. It houses a variety of artistic exhibits, from Baroque to Classicism. After World War II, this structure was rebuilt and new exhibition rooms were built in order to display all the art work. The ‘Green Vault’s story started in the year 1547. It was created to be an additional west wing of the palace and it was built to withstand fires and thieves, with thick walls and iron doors and shutters protecting it.  This room was used as a treasure chamber throughout the 17th century by the rulers of Saxony, for all their important documents and jewels.

Between 1723 and ’29, the vault was open for public viewing, thanks to Augustus the Strong. He invited a select audience to view his treasures, as a symbol of his wealth and power. He exhibited his entire collection of valuable objects. Bronze statues and artwork in gold, silver, ivory and amber could now be displayed in two rooms, the Hall of Treasures and the Corner Cabinet. This style of Augustus the Strong’s was used as the framework for the reconstructed building as well. This was also the first time someone of high standing made their treasures and art accessible to the public. These rooms were left unchanged for almost two centuries.

The Green Vault was severely damaged during WWII and at the end of the war, the treasures were taken away to the Soviet Union, only to return in 1958.  In 2004, the New Green Vault was opened in the newly rebuilt Dresden Castle. In 2004 and 2006, the Neues Grunes Grewolbe and the Historiches  Grunes Grewolbe were opened, with exceptional treasures on display. The former houses around a thousand carefully selected pieces of art which can be viewed close up in glass show cases. This is the ‘New Green Vault’. Statuettes and other fascinating objects, made of gold, silver, gemstones, enamel, mother of pearl, coconuts, ostrich eggs and ivory are kept here. In the other room lies works of art, set in Baroque. This room is an exact replica of the one used by Augustus, thus called the ‘Historical Green Vault’. This chamber consists of 9 other rooms, with different, themed displays of artwork created in a stunning variety of luxurious materials. Visiting this opulent, one of a kind treasure chest is sure to be quite an experience for whoever visits so be sure to put this on your list. Also, visit the popular attractions in the city by following Dresden itinerary 1 day.