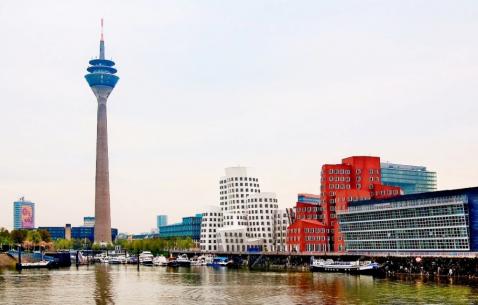 One of the striking things about Dusseldorf, apart from being one of Germany’s richest cities is the juxtaposition of the buildings. For example, right in the middle of a commercial district you’ll come across the Hofgarten Park which is quite conspicuously stands out. Since Dusseldorf was one of the worst affected German cities during the Second World War, 80% of the city had to be re-built ground up including most of the landmark and monuments.

Considered to be the economic powerhouse of Germany; the city’s location along the Rhine just makes it more desirable in terms of both tourism and business. The city’s affinity for an extravagant lifestyle is obvious through its high end shopping districts (Konigsallee), unending bars lined up in close proximity (Alstadt) and of course the Medien Hafen where most media companies have staked their claim. The aura of Dusseldorf needs to be felt and if you’re visiting here after any other German city, the differences, subtle as they may be, will be felt almost immediately.

Essential travel information and Dusseldorf tips for your visit