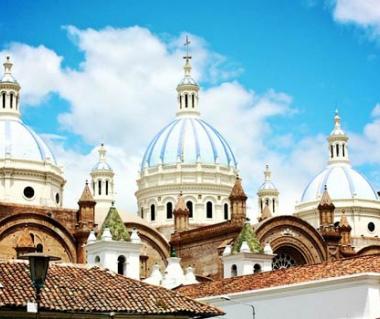 Plan Your Trip To Ecuador

Places to visit in Ecuador

Ecuador is a country in Northwestern South America, with a Pacific Ocean coastline, lying on the Equator between Colombia, to the northeast, and Peru, to the south and east. Cotopaxi is the world's highest active volcano... Such cities and best known places are the Galapagos Islands, and the city of Cuenca. Picturesque colonial centers, Kichwa villages, Amazonian rainforest and the breathtaking heights of the Andes Ecuador may be small, but it has a dazzling array of wonders.

Air: - Quito's airport has an executive lounge shared by all the airlines with drinks, snacks, and seating areas. Another port of entry is Guayaquil, which has a modern airport that includes the typical amenities such as restaurants and duty-free shopping. The airport is located north from downtown.

Rail: - There are no international train services into Ecuador.

What to see:-. Just need to visit the Independence e Square, near the Presidential Palace, admire the monasteries of La Compagnia, San Francisco and San Diego, and visit the Museum of Colonial Art, which contains the magnificent works of the masters of South America – picture Guyasamina Osvaldo Oswaldo Viteri and Olga Fish. The two worlds seem to meet in Ecuador or the city on the Equator. Ecuador Sightseeing therefore has the flavor and color of both the worlds in its architecture, its ecology, history and culture.

If you are tired of these sightseeing trips and want to rest, Hosteria San Jorge is the best place .It is the only mountain resort with a huge natural preserve, encouraging ecotourism and conservation in Ecuador.