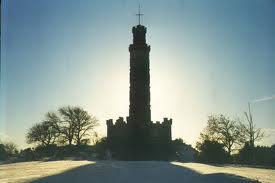 Find hotel near The Nelson Monument

In the honour of the Vice Admiral Horatio Nelson, the magnificent Nelson Monument was built in Edinburgh. He became a martyr at the Battle of Trafalgar. Being located on top of Calton Hill, the monument rises toward the sky from where the entire city is be visible.

On the top of the tower a large ball called the Time Ball made of wood, is situated which was elevated and descended to denote the time. The monument is built with black stonework with the Royal Navy’s ensign at the top. If one wants to climb up the tower, one needs to climb a rather tight spiral staircase. The museum on the ground floor is impressive and gives a detailed and elaborate description of the career and death of Lord Admiral Nelson.

There are 170 steps in order to climb the tower. One can see all over the city and as far away as from the top of the bridge. The pollution free environment with fresh oxygen is an added advantage to the tourists who tend to come to the monument again and again. The tower has iron railings on its top and many small restaurants are built for the public near the monument.

How to Reach The Nelson Monument

50.59% of people prefer walking in order to reach The Nelson Monument

People normally club together Edinburgh Dungeon and The Scott Monument while planning their visit to The Nelson Monument.