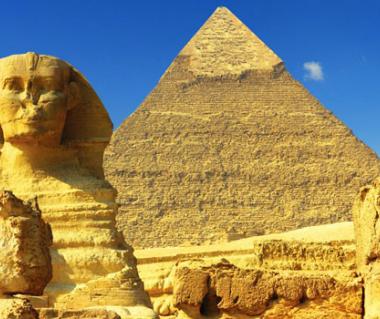 Plan Your Trip To Egypt

Places to visit in Egypt

The stunning, colossal monuments of Ancient Egypt never fail to astonish. The heat, sight and the light of the desert invigorate. The cool, turquoise waters rejuvenate. A romantic cruise along the world's longest river dazzles the senses. A first class getaway resort in the Red Sea Riviera is pure escapism. No place has the magic, mystery and pleasures of Egypt.

Egypt is probably one of the oldest vacation spots. Early Greeks, Romans and others went there just for fun, and to see the wonders of some of mankind's earliest triumphs. But Egypt is much more than Pyramids and monuments. It is also famous for Red Sea Scuba diving, hot nightspots, luxury hotels and five star restaurants. It is romantic cruises down the Nile on festive riverboats, a night at the grand opera and is an experience of a lifetime. Egypt is a land bustling with life, sound, visual beauty and excitement. More than anything else, we want you to think of Egypt as fun. For thousands of years, it has been the playground of emperors and Kings.

Today, Egypt is a country of contrasts, from its chaotic and over-populated cities to the vast deserts holding ancient secrets in their wombs.

The best time to visit Egypt is between the months of November and March, when the daytime temperatures hover in the region between 15 - 30 degrees Fahrenheit, making it very pleasant for sightseeing forays. At night the temperatures do fall but it never gets very cold and uncomfortable. The only thing is that if you plan on swimming at the beaches on the Egyptian coast, the water maybe too cold during December and February. Winter is also peak tourist time, so hotels maybe a bit on the expensive side. But having said that, it still is the most pleasant time to be in Egypt.

International flights come into Egypt from many countries around the world. There are also chartered flights to Cairo, Aswan and Luxor. Egypt has quite a few airports, but only seven of these are official international ports of entry:Cairo, Alexandria, Luxor, Aswan, Hurghada, Sharm el-Sheikh and Marsa Alam. With that said, most air travelers enter Egypt through Cairo,Alexandria or Sharm el-Sheikh, while the other airports tend to be used by charter and package deal flights only.

Egypt is considered the land of ‘sights’ in the popular imagination, and not without good reason—from the pyramids of Giza, the awe-inspiring Sphinx and the monuments liberally littering ancient Thebes, to the underwater explosion of color in the coral reefs off the Red sea coast.

The city of Luxor is a regular tourist hotspot for this reason most travelers visit Egypt—the sheer grandeur of its well-preserved monuments dating from the Old, Middle and New Kingdoms of ancient Egypt. The best part is that you don’t need to be an Egyptologist or even a history buff to appreciate the beauty of Luxor’s monuments. The temples of Karnak on the east bank of the Nile in the Luxor area are nothing short of spectacular.

The Valley of Kings -

The Valley of Kings here is highly recommended, since the tombs there gives a pee-a-boo of the elaborate way in which ancient Egyptians conceptualized the afterlife. The tomb of Queen Nefertari allegedly contains the finest wall paintings in all of Egypt.

Cairo is a lively and tourist-friendly city, with an active cultural scene and a bustling nightlife. The Egyptian Museum is a must-visit, with endless rows of sarcophagi, mummies and other tomb treasures. The Museum is open from 9 am to 5 pm on all days except Friday, when it is closed for few hours.  The Bazar Khan al-Khalili is a vast maze of shops in Cairo that offer fantastic opportunities for souvenir hunting.

No monuments is Egypt are visited as much as the Pyramids at Giza and the Sphinx —this is truly the stuff that the glossiest Egyptian tourist brochures are made of! The three pyramids are devoted to the father-son-grandson trio of Cheops, Cephren and Mycerinus.

Eating out in Egypt-

The Middle East has loads of unique culture, much like any region in the world.  Each country's sights are different, the people have their own traditions, and the food can vary from country to country and even city to city.  But while the differences can be seen when traveling through, there are many similarities.  Take Middle Eastern food for example.  You may be thinking hummus and pita bread when thinking of the cuisine style, but there is so much more than that you may not be familiar with, each better than the last. Middle Eastern food like Ta’amiya, chawarma and fuul is readily available, and Cairo also offers a good representation of world cuisine.

Nile cruise: One of the highlight of your trip to Egypt would be to take cruise on the river Nile between Luxor and Aswan, which could be a duration of three to five days. This is the classic way to see Egypt’s wonders unfurl and present them self to you.

Diving: The Red Sea enjoys a reputation for being the ultimate in underwater adventure. Colorful marine life and striking coral reefs that surround are a bonus; the Ras Mohamed National Park for the underwater world is at its best.

Snorkeling and swimming: Snorkel and swim along Egypt's spectacular coastline. If you happen to be in Sharm el-Sheik take a ride on glass-bottomed boat to view the fabulous marine life present.

Egypt can be a shopper’s delight - exquisite carpets, typical Egyptian historical reproductions and artifacts (the best ones are found in Luxor and Aswan), papyrus wall hangings, dates and dry fruits, spices and prayer beads, colourful fabric and clothes, fabulous jewellery. Its an endless list. The cities have their own quaint bazaars, the most famous of which is the Khan-el- Khalili in Cairo. Walk down the crowded lanes and do the expected thing - bargain your way through quaint shops selling a host of quaint dreams. This trip is not just a shopping experience – savour the flavours of a different world. At the modern shopping malls you can shop in airconditioned comfort and pick up wall hangings and the famous Egyptian rugs and carpets among other things.