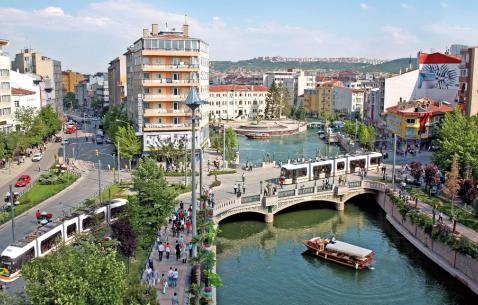 Eskisehir is a city in Turkey which is sure to break all the assumptions you have of the mysterious land. The progressive and liberal nature of the people along with its fabulous tourist attractions, it is a rare treat for traveller’s who like to be surprised by their destination. Located in the north-west of Central Anatolia, Eskisehir flaunts water canals with bridges running over them- giving a romantic backdrop for its visitors. The city’s buildings are not older than 50 years even though the neighborhood of Odunpazari is an exception. The Porsuk River in Eskisehir embraces the city’s interiors well enough to keep it cool on a sunny day and add to its aesthetics, while the local life in itself is vibrant- inviting people from all over the worlds with open arms. The planning of the city to evolve into a modern mecca has boosted the tourism in Eskisehir like never before. The science and art parks with man-made beach, technologically enhanced museums only add to its modern appeal. Eskisehir is known for its exhilarating stories of travelers. Don’t miss out on the nightlife which the city’s student-base boasts of. However, Eskisehir has found a way to maintain its culture while still embracing the changing times.

Essential travel information and Eskisehir tips for your visit