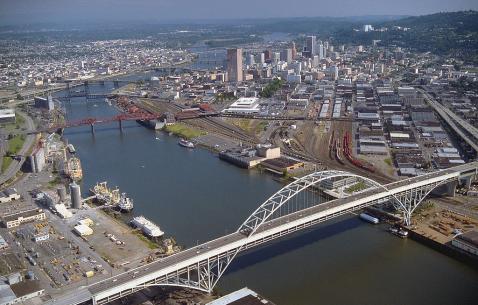 Orlando’s second most populous city, Eugene, was named after its founder, Eugene Franklin Skinner. In 1846 he erected the first cabin here which was used as a trading post until its relocation. Initially it was called Eugene City till 1889, when it was finally shortened to just Eugene. Ever since its inception the city has seen rapid growth, especially because of its timber industries.

Though the University of Oregon and the Lane Community College are located in the city, Eugene is more popular due to its natural beauty, love for the arts and the tremendous number of recreational activities that can be readily pursued here. People here are extremely enthusiastic about running, jogging, cycling, rafting and kayaking owing to an abundance of Mother Nature’s gifts. For these and other reasons the city is famously called “Emerald City” and “Track Town, USA”.

Another very famous connection that the city of Eugene has, is with the Nike Corporation. University of Oregon athlete Phil Knight and his coach Bill Bowerman conceptualized the company in 1964 and the rest as they say is history. Till date Nike gives out generous donations for the upkeep and facelifting of various athletic institutions in Eugene. The official motto of the city itself is “A Great City for the Arts and Outdoors”. And people do love staying outdoors over here. One can always find people out for a jog or taking their cycle out for a spin.

For a tourist or a visitor, Eugene has some special treats in store. There are numerous wineries and vineyards in Eugene which serve some lip smacking exotic tasting wines spread all over the area. Then there are natural trails after every few kilometers which are always waiting to be explored on foot & by cycle, stores and regular eventsthat delve into the fine artsand there are some mesmerizing parks that are perfect for a long romantic stroll or a fun picnic lunch with friends and family.

Though Eugene is not a very well sought after tourist destination, that is no reason for which it shouldn’t just be the perfect spot for that peaceful vacation you’ve been craving for since a long time. Sparse crowding, excellent weather almost throughout the year and some very friendly folks make this city an extremely sensible and delightful place to head forward to for a blissful vacation. If monuments and architecture are not your idea of a tourist destination then you are sure to fall in love with this beautiful city and its fast, athletic lifestyle.

Essential travel information and Eugene tips for your visit

Plan Your Trip To Eugene

The best tours and activities in the city, guided by experts to give you a local insight to the best of Eugene