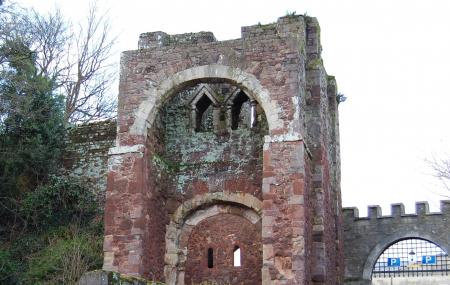 The Castle of Exeter is located at the highest point of the city. Due to the reddish colour of the volcanic rock on which it stood, it came to be known as Rougemont Castle locally.

Richard III visited Exeter castle, he was really taken aback by the strength and beauty of the castle. Once a military fortress; lost that title after surrendering to General Fairfax in 1646. Today, although most of its battlements and towers are intact, the real beauty of the structure is hidden behind the surrounding of park and gardens. It is today best viewed from the castle yard.

There are few remains of the early buildings within the walls, with its site being mostly occupied by the former Sessions House and Devon Assize Hall. There is also a lofty entrance gatehouse, with a circular arch which can still be seen from Rougemont Gardens. There are still prominent remains of the boundaries of the castle enclosure and early towers to the West and East.

The initial building that got the name of the castle is said to have been built by King Athelstan, and is recorded to have been destroyed in 1003 by the Danes.

William the Conqueror-in 1068 selected this castle as the strongest fortified castle that had ever existed at Exeter.

Much of the original structure of the Devon Court has undergone frequent renovations to make it apt for the business of the county.

Containing a number of courts, it is faced with Portland stone.

The eastern side of the session house offers an opportunity for a visitor to take a walk and see the whole of Exeter and surroundings in a panoramic view. The castle is now in private hands and the new owners aim to create a vibrant hub of music, art, food and drink and wish to maintain it enough to keep it open for the next 1000 years!

How to Reach Exeter Castle

90.95% of people prefer to travel by car while visiting Exeter Castle

People normally club together Queens Court and Underground Passages while planning their visit to Exeter Castle.