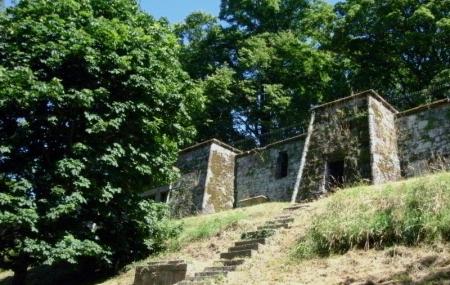 Hidden under the city wall, the catacombs were meant to accommodate 1,400 coffins in every vault on each side of a central and a long passage. The coffins were made to slide into a brick lined vault while the priest on duty would do the needful by conducting the service. Next to it in a small, walled off area stood a bricklayer who would wait until the end, when he would then block up the entrance with bricks.

The catacombs were also categorized into Dissenters and Anglican with a gate and an internal wall across the passageway. Initially, the charge for interment was 20 guineas, a charge which turned out to be far too high. Most of the bodies that were buried belonged to outside of Devon, as wealthy local families chose to bury their dead elsewhere. The price was reduced to 10 and finally 7 guineas, which was enough to make the catacombs a commercial disaster.

The City took over this place using the end of the passage as a temporary morgue for the bodies that could not be identified from the Theatre Royal fire in September 1887. The walls were then were covered with lime wash after the bodies were buried in Higher Cemetery. During the Second War, passageways were put to good use as bomb shelters.

The structure is now musty with the outside wall crumbling and weeds growing close to the stonework.

During the swine flu outbreak in 2009, it was reported that the City Council would use the Catacombs to store the victims of the flu, in the worst case scenario. A spokesman was quoted as saying "As part of our overall planning for a range of possible scenarios we have looked at what we might do should the current crematorium and cemeteries within the city not be able to keep up with the need for funerals.We have some empty catacombs in an old cemetery in the city, off Bartholomew Street. These are 19th century underground burial chambers which are normally a tourist attraction. They can however be safely used for their original purpose and allow us to temporarily store bodies in the remote possibility that the need should arise." So even in 21st Century Exeter, the catacombs might get to serve their purpose.

People normally club together Northernhay Gardens and Exeter Quay while planning their visit to Exeter Catacombs.