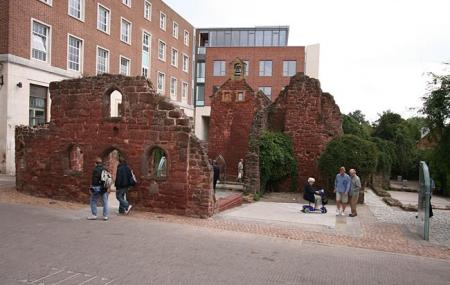 The well known chapel and almshouses were founded by Canon John Stevens DD, (Doctor of Physick), in 1457, to initially house thirteen poor men. A surviving petition has brought light upon the fact that Stevens had bought "a parcel of ground, void at the time of purchase and not built upon, adjoining to the closure of (the) cathedral church". The almshouses and chapel were constructed in 1458.

Through help of various sources for funding, by 1879, the poor women in the almshouse each were able to receive 3s a week.

During the 17th and 18th Century regulations changed, allowing married couples to live in these almshouses. In the 19th Century, they changed again in favor of widows, and single women.

The residents were then moved to Summerland, after which the almshouses were reported to be in a poor state of repair. The chapel attached to the almshouses was used as a carpenters shop in the 19th century.

The chapel and almshouses were constructed on an open ground, out of red Heavitree Breccias with dressing of Beer stone, which was used for moldings around the doors and windows.

It is also said that there was also a stone crypt, although there was no trace found later.

The entrance was from Catherine Street into a large room that contained a bake-oven and fireplace. The building also had a range of small cubicles which opened into a central courtyard along with a well in the north wall of the courtyard.

The glass panels present here is an artwork titled Marking Time. The door shaped panels have pieces of medieval pottery and glass through to a Coke can that have been excavated by archaeologists which might prove helpful in further excavation. This city has a lot of places really rich in culture and heritage, this is definitely one of them.

How to Reach St Catherine's Chapel And Almshouses

People normally club together Northernhay Gardens and Exeter Cathedral while planning their visit to St Catherine's Chapel And Almshouses.