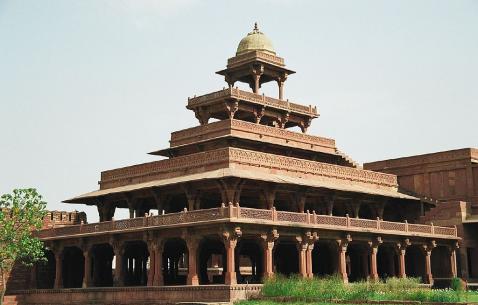 Fatehpur Sikri is a city in Uttar Pradesh developed by the Mughal emperor Akbar, 40 kilometers away from Agra. It is a UNESCO world heritage site. As a Fatehpur Sikri travel guide will tell you, the place is an architectural marvel that takes us back to the 15th century when the Indian architectural style was evolving with all its might like a ducking becoming a beautiful swan. The first mentions of FatehpurSikri can be found in Mahabharta where it is called ‘Saik’. It has been continuously inhabited since prehistoric times and traces of this are found in inscriptions around this famous archaeological site.

Babur visited this site and built a Jal Mahal and a garden surrounding the Lake. He has mentioned ‘Sikri’ as being a beautiful site in his memoirs. Babur’s grandson Akbar was the one who shifted the Mughal capital to Fatehpur Sikri for 13 years. His intention of moving the capital was that he wanted to be closer to Sufi Saint Salim Chisti who lived here. Akbar loved the saint and revered him.

Jama masjid, Buland-Darwaza and the Tomb of Sheikh Salim Chishti; Khass Mahal, Shahi-Bazar, Mina-Bazar, the Panch-Mahal, Khwabgah, Diwan-i-Khas, Anup-Talao, Chaupar and Diwan-I-Aam are Fatehpur Sikri attractions that were parts of this first Mughal planned city. The city was not only connected by terraces, it also had an excellent drainage system and water supply which showed the thought put behind the town planning by the construction engineers at that time.

Fatehpur Sikri is a classic example of Indian architecture. With Indo-Islamic influences and local impressions, it is a fusion of different sensibilities.  Apart from Architecture, many artisans had settled here during the Mughal period and various arts flourished in the area.

A fraction of the earlier city has been studied and preserved. The old wall that protected the town still exists of three sides of the monument, although it makes the monuments look incomplete rather than protected. The town now is one of the fifteen blocks in the Agra district and a Loksabha constituency. The population has shifted to a modern settlement nearby and hardly anybody lives in the old area.

Fatehpur Sikri tourism is a jump into the glorious past of India, of prosperity and grandeur. History lovers and archaeology buffs can spend days here without getting bored. Plus, if you add the nearby Bharatpur bird sanctuary to your list, it will complete your exotic experience.

If you decide to visit Delhi or Agra, a trip to Fatehpur sikri is certainly in the cards. The ‘City of Victory’ is not only a treat to your eyes, but just like the old days, you might find beautiful hand woven cloth or traditional handicrafts in the markets nearby.

Essential travel information and Fatehpur Sikri tips for your visit

View all Hotels in Fatehpur Sikri