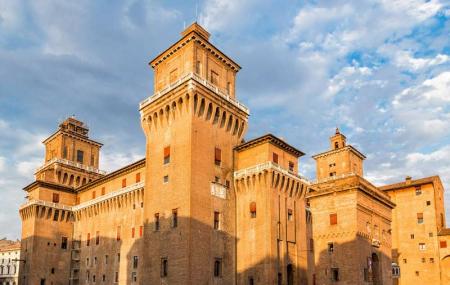 Castello Estense is a charming medieval castle that is located in the heart of the city of Ferrara. Symbolized as the face of the city, the towering Castello Estence was erected upon the orders of Nicolò II d'Este in 1385. The castle has elements of the Renaissance style of architecture and has quite an interesting story behind its construction.

The major highlights of the Castello Estense are:

Apart from the above, the Castello Estense is full of small fascinating exhibits and art that can leave you spellbound. Some sections of the castle are being used as government offices presently. To find more information about Ferrara, you can also visit the tourist office in the inner courtyard,  which is available in a variety of different languages.

This museum is included in "MyFe Card" Ferrara, the combined ticket for the Museums of Ferrara.

How to Reach Castello Estence

Love this? Explore the entire list of places to visit in Ferrara before you plan your trip.

Fancy a good night's sleep after a tiring day? Check out where to stay in Ferrara and book an accommodation of your choice.

84.03% of people prefer walking in order to reach Castello Estence

People normally club together Via Delle Volte and Palazzo Dei Diamanti while planning their visit to Castello Estence.