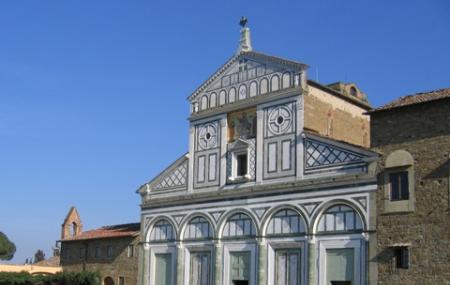 One of Tuscany’s greatest examples of Romansque architecture soars above the city from atop one of its highest hills. According to legend, Minas, the Armenian prince after whom the church is named was sentenced to be eaten by a panther by Roman Emperor Decius. When the panther refused to eat him, Minas was beheaded instead. Not letting that deter him, Minas picked up his head and walked up to this hill to his hermitage. In the 8th century, a chapel was built here, but the building you see today was begun in 1013.

Highlights of the church are:

There’s a monastery next to the church, run by the Olivetan monks, though it used to be Benedictine. Today, the monks are famous for the liqueurs, honey and herbal teas they produce to sell at their on-site shop. Around the complex, you’ll see the wall Michelangelo built during the siege of Florence. There’s a cemetery full important dignitaries there.

Love this? Explore the entire list of places to visit in Florence before you plan your trip.

Fancy a good night's sleep after a tiring day? Check out where to stay in Florence and book an accommodation of your choice.