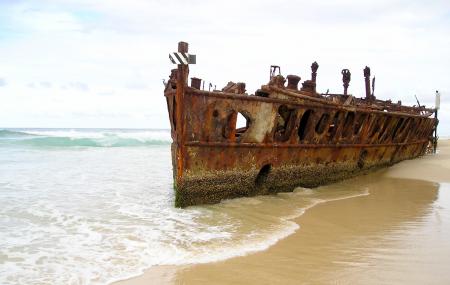 It’s a startling landmark on an otherwise usually pristine beach – the ruins of a once magnificent ship rusting away on the sand. It’s been here for over eighty years. The Maheno was built in Scotland, and was the world’s first turbine driven steamer. And it was a luxury steamer too. During WWI, it was even a hospital ship.

In 1935, a cyclone grounded the ship onto the beach here, and the saltwater has been slowly wearing it down since. Though this is one of the island’s most popular attractions, there’s not much to do here. Take a few pictures, and remember its story so you can tell others.

How to Reach Maheno Wreck

Love this? Explore the entire list of places to visit in Fraser Island before you plan your trip.

Fancy a good night's sleep after a tiring day? Check out where to stay in Fraser Island and book an accommodation of your choice.