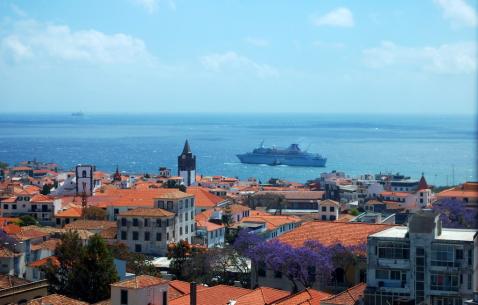 There was an abundance of wild fennel in a beautiful forested valley leading to the sea. The first settlers upon discovering its fertile soil, built a medieval fortress which later developed into a town called Funchal. Today, Funchal itineraries are among the top Portuguese holiday delights.

Initially the island was divided into two captaincies, Joao Goncalves Zarco took over the zone which had a great geographical position, and settled with his family. Soon Funchal became an important maritime port and the most productive region surpassing the other settlements. Its coastal position made it develop an urban core.Between 1452 and 1454, Funchal became an important transfer point for European trading, so merchants and sailors including Christopher Columbus came here to take advantage of the transient conditions of the port. During this time the sugar industry expanded significantly thus making Funchal the most important industrial centre. This prosperity soon attracted privateers and pirate attacks, leaving Funchal very vulnerable. In 1566, French corsairs came to the shores of Funchal with a force of 1200 men, on a small fleet of three main ships and eight support crafts. The attackers assaulted the land where the defence was thin and the city suffered violent attack that lasted fifteen days. Franciscan monks tried to defend the city but it was futile, it the end very little remained of Funchal.

A year later, a military architect, Mateus Fernandes III came to modify and rebuild Funchal especially the defence system. His work was considered to be the oldest plan of the island of Funchal.

Soon Funchal recovered from the aftermath and caravans travelling between the Indies and the New World stopped in transit in Funchal. The sugar industry was suffering not only because of the after effects of the 1566 war but also from epidemics and cheaper exports from the New World and Africa.  The growth of viticulture became a very lucrative business, and the finest wines were being exported in great numbers. Passionate wine makers moved to the island and settled in the urban areas. They built three storey houses with an intermediary service floor for storage and wine cellars. Some houses had a tower to watch the port and keep a sharp eye on the harbour.  The extreme change in lifestyle, commerce, architectural and structural layout expanded the city with new estates and new class of people. The nuns of Santa Clara, owners of large spacious land entered into the wine industry, financed the ships that would take their wines to different parts of the world in exchange for sugar.

Holidays in Funchal soon became famous for providing leisure, a centre for tourism and therapeutic health. Famous personalities started to recuperate on this island for various reasons, such as the Empress Elisabeth of Bavaria travelled to the island for leisure and health, Winston Churchill painted a few paintings on his holiday at Funchal, and Charles I of Austria visited for similar reasons. A formal port was created, the Port of Funchal and later the Santa Catarina Airport was built and Funchal was taken ahead and turned into a major international tourist destination, with a series of hotels and ocean front residences. This laid back city owes its glory to the white gold, the Madeiran sugar. It became Europe’s most picturesque and clean capital. It is known for its style as well as its substance. European Liners call at the harbour on their maiden voyage, almost like a tradition.

Funchal is nestled inside a valley which surrounds it like a ring, with gentle slopes. At night the lights from the homes and offices on the island rise straight up as if suspended in air, twinkling like stars. Its excellent location in the Gulf Stream makes the weather ideal throughout the year, for roses, and bougainvillea and other exotic flowers to tumble down the slopes of the verdant mountains in a burst of colours.

These friendly Portuguese people believe in warm hospitality, are gracious and joyous. Tourists come from all over the world to enjoy various activities here such as diving in the crystal clear water, surfing, swimming with dolphins, whale watching, walking along the coast, trekking up the mountain, paragliding. They can indulge in cuisine made with fresh aromatic ingredients, after a vigorous hike, or a serene walk to contemplate nature. The locals provide a vast display of crafts and embroidery for sale and it’s a paradise for shoppers. There are two stages in the local night life. One is the bars and night clubs that operate between midnight and 4am and the other between 4am to 7am.Shopping in Funchal isn’t chopped liver either.

The storm on February 20th 2010, was caused by a severe Atlantic depression. The tourist and hotel areas were not affected but the constant deluge of rains caused the rivers to flood and debris to collect close to the rivers. However being a modern city, the Mayor constructed a new promenade from the debris and fragments left behind. Funchaland it’s tours and tourism emerged stronger and friendlier than ever.

Essential travel information and Funchal tips for your visit

Plan Your Trip To Funchal

The best tours and activities in the city, guided by experts to give you a local insight to the best of Funchal