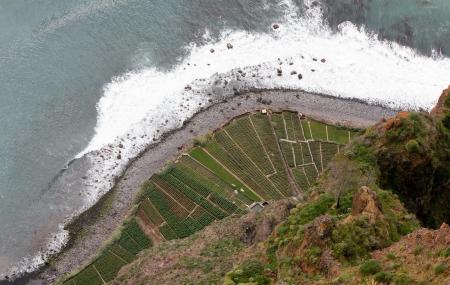 Rags of cloud and mist clung to the cliff and as the sun erupted on the giant palisade, it shone with its sheer curtains of solid rock in which tiny bits of quartz winked like tiny gems in the sunlight. Stand on the skywalk and watch the mystery of the ocean unfold below. The waves of the turquoise ocean softly crashing against the mighty cliff, like fingers brushing each stone with a gentle caress and the wind ushering them back into the deep. This is Cabo Girao, The skywalk on Europe’s Highest Cliff in Madeira Islands.

There are terraced fields below the sheer cliff which can be reached by cable cars.Cabo Girao is one of the most popular tourist attractions. After redeveloping wider roads more shops have opened up and plenty of parking. The skywalk in glass is exhilarating. It leaves the guests enchanted with the views.

How to Reach Cabo Girao

Love this? Explore the entire list of places to visit in Funchal before you plan your trip.

Fancy a good night's sleep after a tiring day? Check out where to stay in Funchal and book an accommodation of your choice.

94.11% of people prefer to travel by car while visiting Cabo Girao