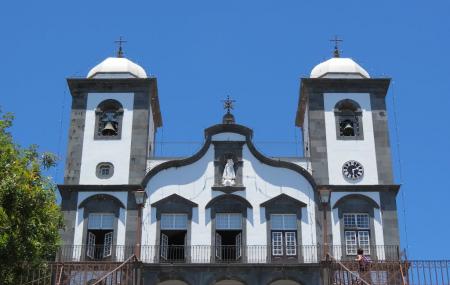 In 1565 the wealthy families in Funchal created the parish of Nossa Senhora do Monte. It was a summer refuge for the nuveau riche. They constructed cottages along the hills. The mild climate attracted more settlers and finally in 1741 the Igreja de Nossa Senhora do Monte was build. Nearly 2 centuries later, this became the final resting place for Charles 1 of Austria, the last emperor of the Austro-Hungarian Empire, who died in exile in April 1922.

As you go up the steps leading to the church, you feel humbled. The serenity and simplicity is overwhelming. Imagine being exiled and far from the core of your ancestral Central European lands. But he, Charles 1, the last monarch of the House of Habsburg spent his last days in exile in Madeira, being accepted by the people which then surrounded him. Some years ago he was knighted as a saint by the Roman Catholic Church, so pilgrimage is more frequent now. Now he lies in a great iron coffin inside the church.

Although this might look like just any other church, its unique artwork ranges from classical to modern. Blue art tiles which were hand cut had been used when constructing the chapel. Using brass and wooden tools, the artisans achieved a glaze finish which is lustrous and the refinement unsurpassed. Apart from the blue art tiles, Trompe l’oeil technique was also used. In this technique, the artist made use of realistic imagery to create an optical illusion, making the viewer think that an object depicted in the artwork is three dimensional.

Several huge and voluminous crystal chandeliers hang like glory cloud from the roof illuminating the church like a palace. The sculptures in the church were made by masters of the craft. The artwork that is painted on the rough roof planks is awe inspiring.

This lovely church which is over 500 years old, has a decorative entrance. The steps leading to the church are decorated with colourful ribbons of many colours, like Tibetan prayer flags. On occasions the church is decorated with agapanthus, which is a South African plant of the lily family, with blue or white flowers growing in rounded clusters, or in bananas leaves.

As you go climb to the bell towers of the church and reach the balcony, you discover the view of Funchal and the sea which is breathe taking.

Love this? Explore the entire list of places to visit in Funchal before you plan your trip.

Fancy a good night's sleep after a tiring day? Check out where to stay in Funchal and book an accommodation of your choice.

80.95% of people prefer to travel by car while visiting Igreja De Nossa Senhora Do Monte