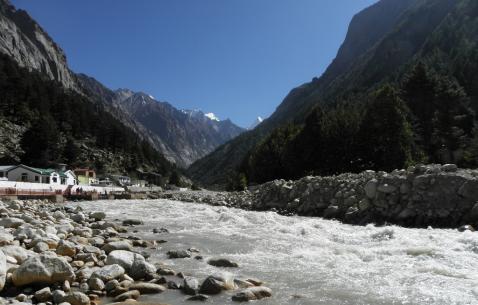 Gangotri (Hindi: गंगोत्री) is a town and a Nagar Panchayat (municipality) in Uttarkashi district in the state of Uttarakhand, India. It is a Hindu pilgrim town on the banks of the river Bhagirathi and origin of River Ganges. It is on the Greater Himalayan Range, at a height of 3,100 metres (10,200 ft). According to popular Hindu legend, it was here that Goddess Ganga descended when Lord Shiva released the mighty river from the locks of his hair.

Gangotri is a holy town in the Uttarakhand district of India, on the Greater Himalayan Range. The town is one of four sites on the Char Dham pilgrimage circuit, and is also the originating point of the Ganges River (at Gaumukh/Gangotri Glacier). At this point the river is called the Bhagirathi River.