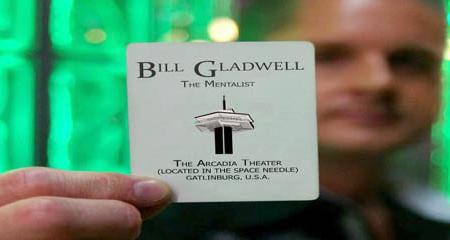 Meet Bill Gladwell, a magician who performs feats that apparently demonstrate extraordinary mental powers, such as mind-reading. He’s a stage mentalist who uses all his techniques to perform his craft. He’s an entertainer and in order to keep entertaining, he keeps learning on a daily basis. He reads body signals fast and accurately, predict what people will do. So visit The Mentalist at the Iris Theatre in Gatlinburg.

Bill Gladwell executes a very exclusive stage act that implicates a high level of audience participation. He involves audience members both on the stage and from their seats. Bill produces an experience that will be talked about and recollected for a long time. He uses his skills as a hypnotist and combines that with psychology, and directed awareness. He has the power to influence people’s mind and actions. By reading unconscious signs of what a person is thinking, Bill is able to operate their decision-making process. He uses five senses to create the illusion of the sixth. He will stand in front of you and pull thoughts directly from your mind. His prediction will be jaw dropping. He will read you like an open book.

A simple example, Bill may ask someone to concentrate on any landmark in the world. Without anything written down or said out loud by the person, Bill describes the location and names the landmark. Be amazed and bewildered by his powers. However he tells the audience multiple times about the positive outcomes of the mentalism. He says it’s due to sleight of hand, body language, and years of experience, not actual mind reading.

His mentalism sets are amazing and outwardly incredible. You can expect to be wowed by crazy predictions, unbelievable feats, and unlikely coincidences. The mental illusions are sure to work out even the most astute mind. Bill displays a personality that is amiable and funny. He has consistently stunned audiences across the nation with his live stage shows.

Love this? Explore the entire list of places to visit in Gatlinburg before you plan your trip.

Fancy a good night's sleep after a tiring day? Check out where to stay in Gatlinburg and book an accommodation of your choice.

87.36% of people prefer walking in order to reach Bill Gladwell, The Mentalist

People normally club together Gatlinburg Sky Lift and Gatlinburg Trolley while planning their visit to Bill Gladwell, The Mentalist.