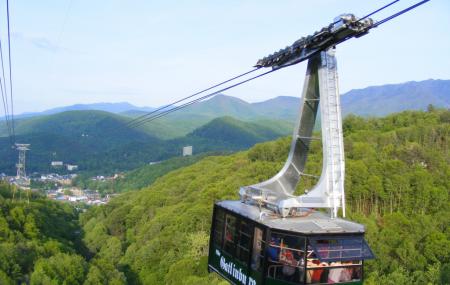 Experience the grandeur of Gatlinburg by tram. Enjoy the easy pace of the journey, riding in the Ober Gatlinburg Aerial Tramway. From the tram catch 360-degree views of magnificent panorama of Gatlinburg and the Smokies. Take in the changing seasons and splendour of the mountains. Admire golden and blue hues that seem to stretch infinitely toward the horizon. The tram is a wonderful way to travel to the Ober Gatlinburg Ski Resort & Amusement Park. It is conveniently located on the streets of Gatlinburg and is fun for all ages. It also is a great transportation system for people wishing access to the activities on the mountain.

Thus the new era of transportation to the top of Mt. Harrison began. The original cable cars were replaced by a pair of efficient giant vehicles. The cars were purchased from Switzerland and were made of high grade aluminium alloy. Construction of the cars and carriers began in November 2006 and was completed in March 2007.

The proportions of the new vehicles are identical to the cars they replaced. The management used the existing loading docks and towers. The new trams offer 15 percent more glass viewing area. Earlier skiers used their car to wind their way up to the snow covered Mt. Harrison to ski. Then the idea of providing a safer method to reach the ski area was explored and the tramway was born. On August 5, 2013 the Gatlinburg Aerial Tramway celebrated its 40th anniversary. Work is always underway to keep the tramway system modernised. New control panels have been installed and brakes have been replaced to conform to safety standards.

The switching of the first car began on Tuesday, April 24, 2007. The existing tram car was replaced by the new tram cars and a load test was performed. Technicians were brought in from Switzerland and elevator inspectors from Tennessee. The tramway has transported over 18 million passengers since opening. The rides are every 20 minutes with service from downtown Gatlinburg. The ride covers a distance of 2.1 miles to the resort.

Love this? Explore the entire list of places to visit in Gatlinburg before you plan your trip.

Fancy a good night's sleep after a tiring day? Check out where to stay in Gatlinburg and book an accommodation of your choice.

94.35% of people prefer to travel by car while visiting Ober Gatlinburg Aerial Tramway