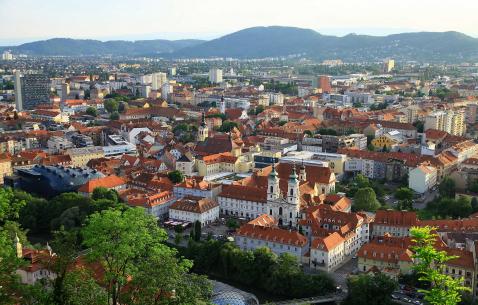 Graz has never fallen to invaders. Its fort, the Grazer Schlossberg, has never been successfully invaded, and the city is quite proud of this. It is Austria’s second largest city, and once was the capital of the erstwhile Styria. The dukes of Babenberg, the Habsburg royalty and the Nazis have at various times ruled the city. A number of important figures have ties to the city too - Johannes Kepler studied here; Nikola Tesla taught here; Erwin Schroginger was briefly chancellor to the local university; Arnold Schwarzenegger was born here. It is also a student city; its six universities house almost 50,000 students.

As far as tourist attractions go the castle hill is the main sight, and the sunsets from the top are spectacular. The old town has been declared a World Heritage Site. The Eggenberg Castle is lavish, and the Zueghaus has an extensive and impressive collection of armour. In the summer Graz invites many of Europe’s musical talents to concert, so tourism takes a boost. The Mausoleum of Emperor Ferdinand II is famous. The many beautiful churches of Graz will dictate much of your sightseeing. Architecturally, the city has a surprising amount of Italian influence, and also some great Mannerist form of buildings.

Essential travel information and Graz tips for your visit