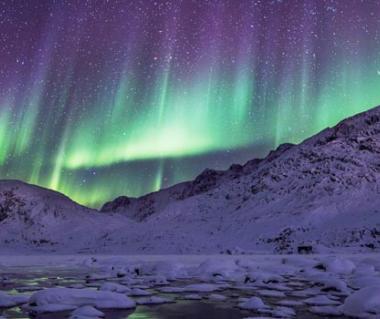 Plan Your Trip To Greenland

Places to visit in Greenland

It might be hard to believe, but many-a-people assume that Greenland is either a fictitious place, or confuse it with Iceland. It’s only now that this fiction is turning to fact and tourists are flocking Greenland more and more each year. Up until now, the standard perception was, to first accept the fact that Greenland is a country and when that bridge is crossed, to leave Greenland for the last- see the whole world first and then visit Greenland. Granted it’s not cheap to travel to Greenland, but where else will you get to see gigantic glaciers, a variety of animals and birds that thrive in the ice and of course the heavenly blend of the Atlantic meeting the Arctic! Given its size- the largest island on the globe- Greenland is quite sparsely populated. This sort of wilderness brings with it a unique sense of freedom to wander at will, and is bound to lead to an unconventional vacation.

Greenland falls within the Arctic Circle, which means that their winter is beyond what most of you are used to- unless of course you reside in Alaska or the Northern Canada. There are places that, when in Polar darkness, don’t see the sun for three months. This doesn’t necessarily mean that no light reaches there. No one enjoys as much sunlight during the summer as Greenland. Even though the summer is exactly hot, per se, it’s enough to give you a passable tan on your face. Greenland shares its season cycle with the Arctic.

The two weather cycles- summer and winter are so different from each other that your experience will vary greatly, depending on the season when you visit Greenland. Greenland’s travel season is spread over the summer, winter and spring. Your travel should also coincide with the purpose of your visit- for example- if you’re travelling to Greenland to see the Northern Lights and want to try your hand at dog-sledding, October-March is the time for you.

Mid May- Mid September is peak tourist season because that’s when the winter ice starts to melt, making way for skiing, boating rides and trips to see the glacier, view some extraordinary polar wildlife like whale watching and experience the midnight sun. During the Arctic summer, the sun never sets. So if you’re in Greenland during the summer, you’ll be a part of the midnight sun experience and have a 24-hour day in its truest sense!

The offseason tourist visits Greenland between November and February. If you want to experience what a real Arctic winter is and try your hand at travelling in the snow like the locals do, the cold and dark winter beckons you!

Since Greenland is a little isolated and not so well connected to the rest of the world, there are no direct flights that fly to Greenland. Depending on which part of the world you’re flying in from, you could either change flights at Iceland or Denmark.

To move around within Greenland, the lack of good roads results in flying between cities. Book your tickets in advance to avoid any unforeseen glitches and delays. In the summer, there are boats that travel to a couple of cities along the west coast.

The people of Greenland are very welcoming and warm. They would like nothing better than to tell you about their culture, lifestyle and any other question you might have. In spite of gaining autonomy, the citizens of Greenland still hold Danish passports and deal in Danish Krones. Private accommodations are available to tourists who would like to live like the local people. The native people of Greenland are called the Inuit. The population is split between the Inuits and the Danish.

The cuisine of Greenland is a different and worth trying if you’re up for trying the meat of whale, muskox and reindeer. You could also stick to other common European and American foods which are found in plenty in Greenland. While you’re at it, try some of the famed Greenlandic coffee. Don’t be alarmed at the prices of the foods- in super markets and at restaurants. Most of the food stuffs like alcohol, dairy products, fresh fruits and vegetables are imported to Greenland, hence hiking up the price of the commodity.