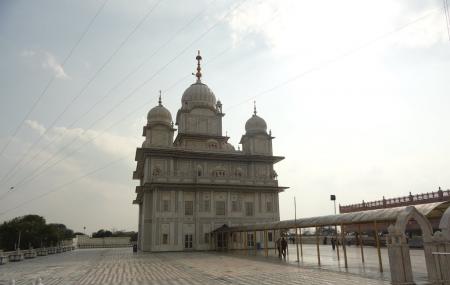 The Gurudwara Data Bandi chhod is situated in the city of Gwalior on the hilltop where the Gwalior Fort is located. After the news of martyrdom of Guru Arjan Dev Ji, Baba Budha Ji declared Guru Har Gobind Singh Ji as the 6th Guru. He started raising the Sant army to fight against cruelty. This is when he built the Fort of Lohgarh which is now known as the Gurudwara Shri Lohgarh Sahib. The Guru also gave justice that was quick and cheap in the Akal Takhat Sahib and this alarmed Emperor Jahangir. He called Guru Har Gobind Singh Ji in his court. He met the Guru several times who used to live in a camp called Gurudwara Shri Manju Ka Tilla Sahib and also went for hunting together. Guru also saved the emperor’s life by killing a tiger and the Gurudwara there is known as the Gurudwara Shri Sher Shikar Sahib.

Once it so happened that the emperor was taken sick and was in a very serious state. The doctors who came to attend him were all bribed to suggest him the remedy of seeking blessings from some holy man to cure his illness. After this the emperor requested Guru Har Gobind to stay in the palace. He agreed and during his stay he found out that 52 Rajput rulers were taken as prisoners by Jahangir and lived in a miserable condition. He was touched and promised to take them along with him when he left the palace.

When the health of Jahangir was becoming worse his wife consulted a saint who told her that the holy man is not to be trapped in the palace. Hearing this, Jahangir immediately sent orders to release Guru Sahib. At this time the guru placed a condition that he would also take the 52 Rajputs along with him when he goes away. As a counter condition Jahangir said that he would release only those who would be able to hold the Guru’s cloth till the next morning knowing that the Rajputs would never go against their ethics but surprisingly next day he found all of them holding the Guru so he was bound to release them and this is how the Gurudwara there is called as Gurudwara data Bandi Chhod.

Love this? Explore the entire list of places to visit in Gwalior before you plan your trip.

Fancy a good night's sleep after a tiring day? Check out where to stay in Gwalior and book an accommodation of your choice.

92.31% of people prefer to travel by car while visiting Gurudwara Data Bandi Chhod

People normally club together Sun Temple and Samadhi Of Rani Lakshmibai while planning their visit to Gurudwara Data Bandi Chhod.