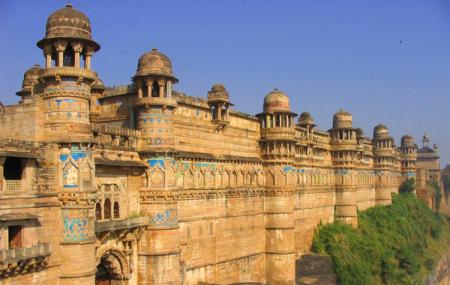 The Gwalior Fort is situated in the eastern part of the city of Gwalior. This whole Fort is divided into two main parts- The Gujari Mahal and the Man Mandir. These two parts are further divided into sub parts. The fort is built on a hillock which is a part of the Vindhyachal Range and is known as the Gopachal Hill. A beautiful small river flows near the fort which is called the Swarnarekha.

According to the legends, there lived a chief of the Silhonia village known as Suraj Sen Kachhawa who went on a hunting trip one day and came across the hermit Gwalipa or Galava. This saint is said to have given him water from the Surajkund reservoir that healed leprosy. As a token of gratitude Suraj Sen built a city and named it Gwalior after the Saint Gwalipa.

The longest ruling dynasty of Gwalior was the Pal Dynasty who ruled for almost a 1000 years and was immediately followed by the Pratihara Dynasty. The rule then changed hands from the Pratiharas to the Turks, Tomar, Suri, Mughals, Rana Jats and the Marathas.

The fort premise is very well maintained and has many historical buildings such as palaces, temples, tanks, etc. There are 11 temples dedicated to Gautama Buddha and Jain Tirthankaras. The main palaces are the Gujari, Man Mandir, Karn Palace, the Jahangir and the Shah Jahan. The fort has a very irregular appearance. There are two main entrances among which the Hathi Pul or the elephant Gate is more beautiful.

The man Mandir was built and named after Maharaja man Singh Tomar and is known for its beautiful architecture and the designs and carvings on its walls. The Gujari Mahal was a gift of love from Maharaja Man Singh Tomar to his beloved wife Mrignayani, the princess of Gujar after he won her hand for marriage. It was built to fulfill her widh of a separate palace with all day water facility from the River Rai. The other important buildings are Teli Ka Mandir, Vikram Mahal, Sas-Bahu Temple, Garuda Monument, Chhatri of Bhim Singh Rana, etc. The Gujari mahal is now transferred into a museum.

How to Reach Gwalior Fort

Love this? Explore the entire list of places to visit in Gwalior before you plan your trip.

Fancy a good night's sleep after a tiring day? Check out where to stay in Gwalior and book an accommodation of your choice.

People normally club together Ghaus Tomb And Samadhi Of Tansen and Sas Bahu Temple while planning their visit to Gwalior Fort.