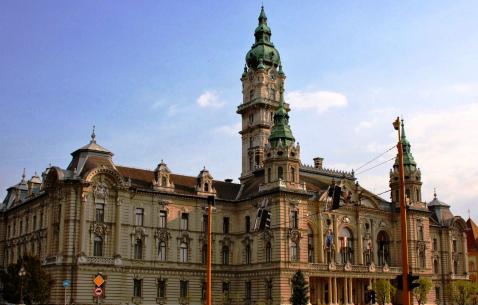 A city in the Western Transdanubia region of Hungary, Gyor is one of the largest cities in Hungary and is the capital of Gyor-Moson-Sopron County. Located in the close proximity of the golden triangle of Vienna, Budapest and Bratislava, Gyor is a huge commercial and manufacturing hub of Hungary.

The foundation of the city dates back to 450 BC and Gyor has seen several empires like Roman, Turkish, Mongolian come and go. The architectural panorama of Gyor hence presents a distinct amalgamation of various cultures. The city is also called as ‘A vizek varosa' or 'A folyok varosa' which literally means City of Waters or City of Rivers because Raab/Raba, Rabca, Mosoni-Duna, Marcal Rivers in Catania. It is also known as 'A barokk varosa' (the Baroque City) given the old part of the city which has dozens of 18th century structures, lavish mansions and beautiful sculptures.

Gyor is also the main entry point for Pannonhalma Abbey which is a UNESCO world heritage site. Dating back to around 1000 years, this abbey was originally a fortress and has been the centre of many socio-political events of Hungary.

Gyor trips are fascinating! The bunch of religious sites, exquisite buildings adorning the old and the new town, great variety of restaurants and pubs and the peaceful Danube River flowing by the side make Gyor a tourism hotspot. Great nightlife, plush shopping malls and theatres offer variety entertainment to the visitors. When on a Gyor vacation, visitors should definitely try the specialty local fish preparations.

Plan a trip to Gyor, explore its rich heritage, relax in its saunas and relish great Hungarian fish delicacies: possibilities are endless!