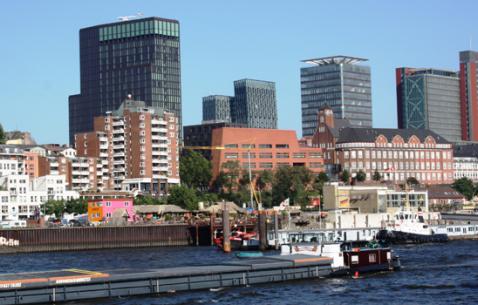 Known as Germany’s “Gateway to the World,” Hamburg is the second largest city in Germany and one of the busiest harbours in Europe and the World. It is a picturesque destination with the harbour bang in the middle of the City, attracting major tourism by both national and international travelers. And, the surprising fact even to some locals, is that, with one of the Airbus aircraft assembly plants, Hamburg is a major location of the world's aerospace industry, right after Seattle (USA) and Toulouse (France).

The City's architecture is a reflection of the mercantile background. The tradition of being modern yet discreet City is what makes Hamburg a beautiful City. People here may appear to be quite reserved at first but after inital few interactions, they are warm and friendly as you'd wish.

The famous Hamburger is named after this Hamburg City where presumably the beef patties and buns were first invented. Hence the people of Hamburg are known as "Hamburger" (pronounce the a like you're saying "ah", and you won't sound silly). Each one of you should visit Hamburg at least once and experience all that it has to offer considering the best time to visit Hamburg.

Plan Your Trip To Hamburg

The best tours and activities in the city, guided by experts to give you a local insight to the best of Hamburg