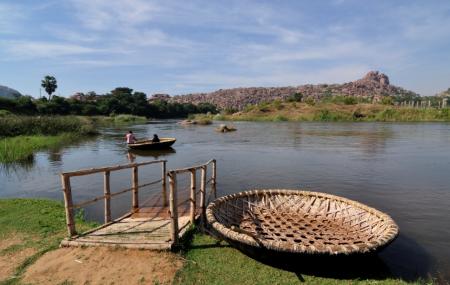 Tungabhadra is a very important river in this region and most of the political and cultural history is significant due to this river. At this region the river takes a number of twists and turns due to the rocky terrains. Hampi is located somewhere in a path in the middle of the mighty river. The river along with the large boulders and rocks was never easy to be crossed except if one has already accepted his defeat.

This river is formed due to the union of two rivers as the name suggests. These are the Tunga and Bhadra River. The Tungabhadra emerges from the Western Ghats and finally meets another mighty river of the east, which is the Krishna and then finally meets the Bay of Bengal. The striking attraction here is the hydroelectric project started here and thus the dam that is built over the river. This place gives a fantastic view of the whole city of Vijayanagar ruins.

The Vijayanagara kings utilized this river to the fullest and built many dams and canals that were mostly used to feed the local water bodies and the palace water bodies. Few of them are still in use to water the surrounding agricultural areas.

The ancient name of the river was Pampa. Legends say that Pampa was the daughter of Lord Brahma and she was a great devotee of Lord Shiva. She did hard penace to please the Lord and thus pleased with her devotion, Lord Shiva married her and so he is also known as Pampapati. It is said that the name ‘Hampi’ has its origin in ‘Pampa’ and you can also find a lot of Shiva temples in the area.

How to Reach Tungabhadra River

Love this? Explore the entire list of places to visit in Hampi before you plan your trip.

Fancy a good night's sleep after a tiring day? Check out where to stay in Hampi and book an accommodation of your choice.