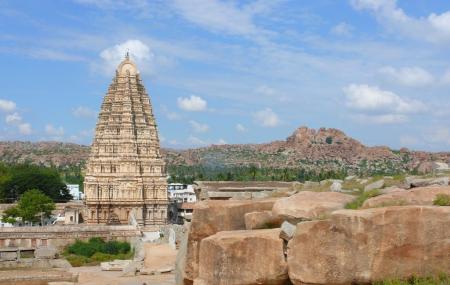 Among the beautiful surroundings of the golden brown boulders and the green banana fields lies the ruin of the “City of Victory” or Vijayanagara. It is in present times known as Hampi. The city is situated on the southern banks of the River Tungabhadra.

This was a rich city full of color at one time which was destroyed by a Muslim invasion that lasted for half a year and thus left only devastated buildings and broken temple towers. After this tragedy this colorful place simply turned into a desert.

This is one of the most extra ordinary locations of India in spite of the poor shape of the old buildings and temples that make them look older than their actual age. There is also faulty government planning here because of which the charm of Hampi is getting lost day by day. The only important thing now that saves it is it being declared as a heritage site.

The city is mainly divided into two parts- one in and around the Hampi Bazar including the beautiful temples and ghats and the other circling the royal enclosure on the north – west of Kamalapuram Village including the remains of ancient palaces, pavilions, stables and royal temples.

According to historical tales, life evolved in this area during the times mentioned in the Ramayana. This was then known as Kishkinda and was an empire ruled by monkey kings, Bali and Sugriva. The huge rocks and boulders placed here unevenly are said to be pushed by monkeys during those times as a competition of their strength.

The main attractions here are the lovely landscapes and the ancient fortifications. This was a rich state until the King Ramaraya was attacked by the Mughal Ruler of Ahmed Nagar and given a painful death. Here came the end of the happy days of Vijayanagara and it was turned into ruins.

How to Reach Vijayanagar

Love this? Explore the entire list of places to visit in Hampi before you plan your trip.

Fancy a good night's sleep after a tiring day? Check out where to stay in Hampi and book an accommodation of your choice.

93.91% of people prefer to travel by car while visiting Vijayanagar

People normally club together Wonderla Amusement Park and Vidyarthi Bhavan while planning their visit to Vijayanagar.

People also prefer to end their day with Vijayanagar.