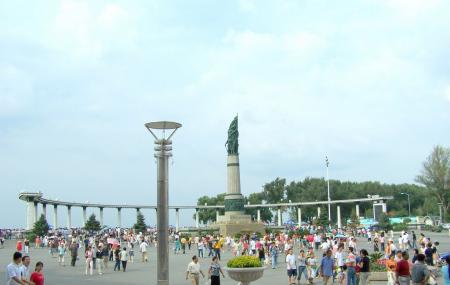 Located in Stalin Park, right across the Zhongyang Street, the tower stands to commemorate the victory over a tragic event in Harbin. When Harbin was attacked by flood in 1957, the water levels rose to 120 meters above sea level. With the lives and properties of the people in danger, many of them worked day and night on the river bank to extend it. Finally the flood receded and the next year the tower was built to commemorate their efforts.

It was co-designed by BagisZelev, a designer from Soviet Union and Li Guangyao, an architect from Harbin Institute of Technology. The tower stands about 22.5 metres tall. The monument measures 22.5 meters in height. At the back, 20 columns form a semi-circle which embody people of Harbin people in the 20th century. The two fountain ponds at the base were added later. They represents two different water levels which are symbolic of the two floods that hit Harbin, one in 1957 and the other in 1998. The square in front of the tower is also a place for holding Political, cultural and Sports activities.

Love this? Explore the entire list of places to visit in Harbin before you plan your trip.

Fancy a good night's sleep after a tiring day? Check out where to stay in Harbin and book an accommodation of your choice.