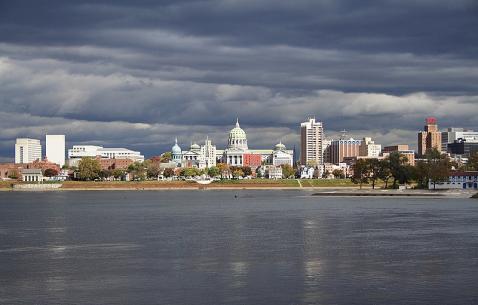 Harrisburg is the capital of the Commonwealth of Pennsylvania, United States and the 15th largest city in Commonwealth. Lying on the banks of the Susquehanna River, this capital city played a significant role in the American Civil War, the Industrial Revolution, and the Westward Migration. Being one of the most industrialized cities in the Northeastern United States, Harrisburg is home to many manufacturing, government, food services, and agriculture-based industries. The city also serves as the county seat of Dauphin County along with being the center of commercial sports in South Central Pennsylvania.

The city also has a heavy dose of history, culture, and heritage that is well appreciated by the numerous tourists who visit the city every year. With an abundance of local beverages, old houses, repurposed buildings, and artistic culture, the city is well worth a visit. Playing a notable role in shaping American history, the city serves as a vibrant hub for activities- both historical and entertainment based. Cruises, arcades, outdoor activities, family fun and a wealth of cultural heritage is what awaits you at Harrisburg.

Often overlooked amidst neighbors like Pittsburgh and Philadelphia, the city of Harrisburg is a historical gem and cultural hub one will cherish visiting. The combination of authentic local delicacies and lifestyle with the bubbling outdoor ambiance and the laid-back atmosphere makes for a fun visit to the city. Taste the special brews at the Appalachian Brewing Company and Zeroday Brewing Company, soak in the serenity of nature at the Wildwood Park and The Boyd Big Tree Conservation Area, treat the book lover in you at the Midtown Scholar, have the mouthwatering delicacies at the Midstate Distillery, Bollywood Bar, Alvarado Bread and Pastry Shop or Pho Kim’s, or simply dig out history at the fascinating Simon Cameron Museum, Capitol Building and Windshield Tour. This city is sure to give you an experience you will forever cherish, so plan your trip, pack your bags and get going!

Essential travel information and Harrisburg tips for your visit

Plan Your Trip To Harrisburg

The best tours and activities in the city, guided by experts to give you a local insight to the best of Harrisburg