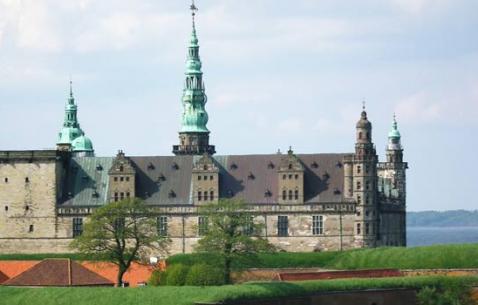 Helsingborg (Swedish pronunciation: [hɛlsɪŋˈbɔrj]; spelled Hälsingborg between 1912 and 1970) is a town and the seat of Helsingborg Municipality, Scania, Sweden. It had 97,122 inhabitants in 2010. Helsingborg is the centre of the northern part of western Scania. There is no formal metropolitan area, but the municipality of Helsingborg City and its neighbouring five municipalities (within Scania) had in spring of 2013 a population of 269.489 inhabitants at an area of 1.353 square kilometres (0.522 square miles), a population density of 200 people/km2. This makes Helsingborg the fourth largest population area in Sweden. The city is also Sweden's closest point to Denmark, with the Danish city Helsingør clearly visible on the other side of the Øresund about 4 km (2 mi) to the west, closer than to the city's own remoter areas. If including all population around the northern part of Øresund, as a Helsingborg-Helsingør metropolitan area, its population increases to 732.450 at an area of 2.802 square kilometres (1.082 square miles). The busy ferry route, known as the HH Ferry route has through history been operated by several shipping lines. As of 2014 more than 70 car ferries departures from each harbour every day. Following the Swedish orthography reform of 1906 many place names in Sweden got a modernized spelling. In 1912 it was decided to use the form Hälsingborg. In preparation for the local government reform 1971 the Hälsingborg city council proposed that the new, enlarged municipality should be spelled with an "e". This was also the decision of the Government of Sweden, effective from 1 January 1971. Historic Helsingborg, with its many old buildings, is a scenic coastal city. The buildings are a blend of old-style stone-built churches and a 600-year-old medieval fortress (Kärnan) in the city centre, and more modern commercial buildings. The streets vary from wide avenues to small alley-ways. Kullagatan, the main pedestrian shopping street in the city, was the first pedestrian shopping street in Sweden.

Home to pretty treasures, is 's best kept secret. A vacation to can typically be of 1-2 days. Immerse in the spirit of the city and you'll not miss your home.