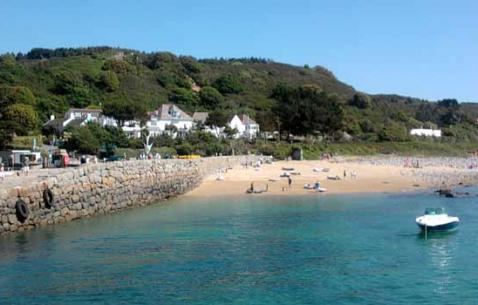 Herm (Guernésiais: Haerme) is one of the Channel Islands and part of the Parish of St Peter Port in the Bailiwick of Guernsey. It is located in the English Channel, north-west of France and south of England. It is 1.5 miles (2.4 km) long and under 0.5 miles (0.80 km) wide; orientated north-south, with several stretches of sand along its northern coast. The much larger island of Guernsey lies to the west and Jersey to the south-east, and the smaller island of Jethou is just off the south-west coast. Herm was first discovered in the Mesolithic period, and the first settlers arrived in the Neolithic and Bronze Ages. Many tombs from that period remain today, the majority in the north of the island. The island was annexed to the Duchy of Normandy in 933, but returned to the English Crown with the division of Normandy in 1204. It was occupied by Germany in the Second World War and the scene of Operation Huckaback, but was largely bypassed. Herm is currently managed by Herm Island Ltd, formed by Starboard Settlement, who acquired Herm in 2008, following fears during the sale of the island that the 'identity' of the island was at threat. Herm's harbour is on its west coast. There are several buildings of note in the vicinity including the White House, St Tugual's Chapel, Fisherman's Cottage, "The Mermaid" pub and restaurant, and a small primary school with about eight children. During a busy summer season, up to 100,000 tourists visit the island, arriving by one of the catamaran ferries operated by the Trident Charter Company. Cars are banned from the island, as are bicycles; quad bikes and tractors used for staff and luggage transport respectively are allowed.

This warm abode of is a delightful place to visit in . Tour packages of are of 1 to 2 days duration.