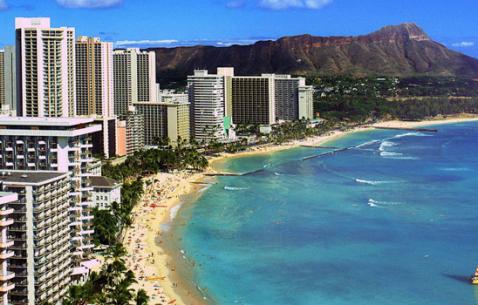 Living in Honolulu, like in the rest of Hawaii, makes being a general beach bum look cool.

The “Sheltered Bay” (the literal translation of Honolulu) sprawls across the island’s southern beaches, so you’ll find your Honolulu travel guides recommending that you cover the city section by section, district by district.

For much of the 19th century, it was the seat of the monarch’s power. The port became extremely popular with merchant ships during this period. Beginning at the end of that century, the Hawaiian monarchy slowly became obsolete. USA annexed the islands soon after, making them a highly strategic naval base. The most important of these bases was, of course, the Pearl Harbour. The Pearl Harbour memorial remains the most important tourist attraction in Honolulu.

The island’s character seems to defy scheduling. Miles and miles of fantastic beaches (including the famous Waikiki), roads to spend hours cycling on are only the beginning. Your trip planner will find Honolulu a hard place to force into an itinerary.

From the most famous military memorial in the world, magnificent vistas that keep you enraptured for hours, jogging routes that look like they were crafted in heaven, surfing some of the ocean’s coolest waves, and of course, luaus and hula shows served up with mouth-watering island cuisine. Travelling through Honolulu, whether the city or the further inland, is kind of chaotic.

Essential travel information and Honolulu tips for your visit

Plan Your Trip To Honolulu

The best tours and activities in the city, guided by experts to give you a local insight to the best of Honolulu