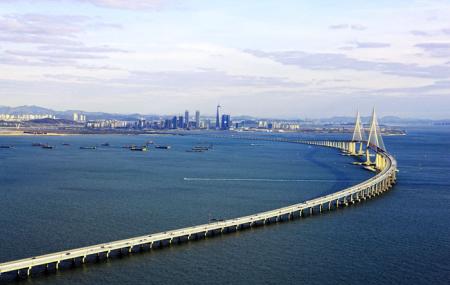 It is the largest and longest cable-stayed bridge in Korea, stretching over 2.38km. It’s a 6-lane bridge connecting Incheon International Airport (located in Yeongjongdo) and Songdo International City. In October, 2009, this bridge was considered as the world’s 7th longest cable-stayed bridge. The main purpose of building this bridge was to reduce the travel duration between Songdo and Incheon International Airport. Measuring the distance between the towers of the bridge will give you an idea as how much technological difficulty the makers of the bridge might have faced. This distance is said to be 800m. This distance is said to be the longest distance between towers after Sutong Bridge in China, Stonecutters Bridge in Hong Kong, Tatara Bridge in Japan and Pont de Normandie in France. The height of the main tower is said to be 238.5m, that is said to be approximately equal to the height of 63 building in Seoul.

If you wish to know more about the bridge, visit Incheon Bridge Memorial Hall (located at one end of the bridge towards Yeongjongdo island).

Motorway traffic can be halted if

How to Reach Incheon Bridge

Love this? Explore the entire list of places to visit in Incheon before you plan your trip.

Fancy a good night's sleep after a tiring day? Check out where to stay in Incheon and book an accommodation of your choice.

People normally club together Jeondeungsa Temple and Wolmido Island while planning their visit to Incheon Bridge.