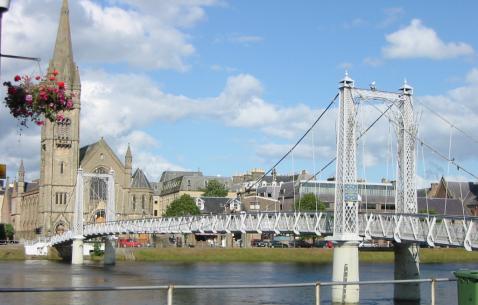 “ My Heart is in Highlands, My heart isn’t here,

My heart is in Highlands, chasing a-deer.

A-chasing the wild deer, and following the roe

My Heart’s in the Highlands, wherever I go”

Such is the beauty of Highlands! And Inverness is the jewel in the crown of this fantastic bounty. Located on the north-east coast, Inverness is where the Ness River meets the Moray Firth. Known for its fantabulous castles, Inverness is called the capital of Highlands. The close proximity to the two epic battle sites; the 11th-century battle of Blàr nam Fèinne against Norway and the 18th-century Battle of Culloden, Inverness has a history that mesmerises. The Gaelic king Mac Bethad Mac Findláich (MacBeth) , the celebrated main character of Shakespeare's tragedy of the same name ‘MacBeth’ held a castle in Inverness.

Inverness is known for its ruined medieval Urquhart Castle overlooking the loch. Inverness is also used as a base to explore the near-by Chanonry Point and the Plodda Falls. The city is also famous for Clava Cairns which is a well-preserved complex of passage graves belonging to the Bronze age, the ring cairns, kerb cairns and standing stones dating back to about 4000 years.

The colourful festivals, the bunch of adventure activities, the unique pubs- Inverness has all reasons to be on the bucket list of a Traveller.

Plan a trip to Inverness, explore its historical, cultural and natural beauty and you will be stunned!

Essential travel information and Inverness tips for your visit

The best tours and activities in the city, guided by experts to give you a local insight to the best of Inverness