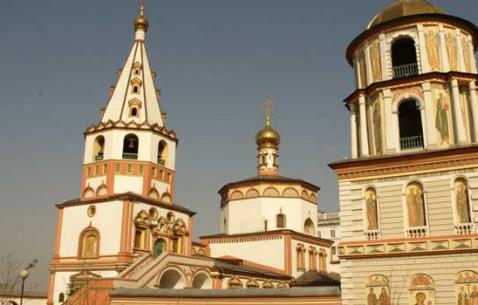 Quaint and hauntingly beautiful, Irkutsk in Russia was founded in the year 1661 as a fort to colonize Siberia. Historically significant, for centuries, Russian emperors and later, communists, exiled political prisoners to Irkutsk. With so many brainy Russians spending their years in exile over here, it is believed that the average IQ level of inhabitants was affected! Bet your Irkutsk travel guide did not tell you this!

Irkutsk is a significant business centre in Eastern Siberia and is considered to be an important Trans-Siberian Railway junction. This city has been blessed by nature and is situated on the banks of the Angara River. It is also a starting point for all the expeditions and tours to Baikal Lake which is situated just a few kilometres away from the city.

To see a 19th century Russian town, head over to the city’s centre. It is full of wooden houses with typical decorative carvings on the walls and window frames. Such kind of buildings, such beautiful architecture was destroyed in Moscow and other big cities of Russia during the industrialization of the 20th century. However, Irkutsk managed to hold on to the charm. It’s a rare opportunity to see what a Russian city would look like if it had stayed the way it was back in the days.

If you are planning a visit to this abode, here is all the information you will need to chalk out a perfect Irkutsk travel itinerary.

Essential travel information and Irkutsk tips for your visit

Electricity and Internet- 220 Volt and 50 Hz AC current supplies are used. Sockets are standard European-size for double round-pin plugs. Most of the hotels provide free wi-fi and there are internet cafes available in main market areas that provide fast speed internet.

If you have nowhere to stay for the night, you can go to Irkutsk railway station where there is a decent and secure waiting area.

Tipping- 5 to 15% is the accepted rate of tipping in restaurants.

The best tours and activities in the city, guided by experts to give you a local insight to the best of Irkutsk