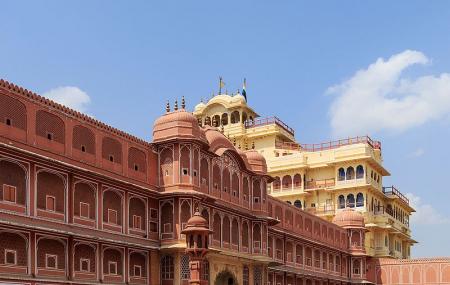 The chief administration centre by the Maharaja of Jaipur, the city palace of Jaipur is one of the most impressive places to see in the city. City Palace is a grandiose area with several smaller palaces and halls enclosed together in one huge structure. The adjacent palaces include the ChandraMahal and the Mubarak Mahal. Several neighbouring palace buildings, towers, patios, temples and garden plots alike lie within the walls of this magnificent fort.

The ones that are not to be missed are Mukut Mahal, Maharani’s Palace, and Shri Govind Dev Temple. Several objects of interest from the royal era have been stored here. There are several Mughal influences on the architecture as well. This is apparent from the fact that the Palace also has the public and public halls named the Diwan-i-Am and the Diwan-i-Khas.

One of the most impressive palaces in India, the City Palace of Jaipur is quite renowned among tourists, thanks to quintessential Rajasthani style architecture, subtle glamour and royal vibes. The palace allows entrance to tourists on certain City Palace Ticket Price. The Tickets for City Palace can be availed directly on the arrival, but remember to arrive a little early to Buy Tickets for City Palace if you do not wish to deal with unnecessary crowd. The City Palace Tickets varies for foreigners and natives. Regardless, with all the majestic charm and allure, the Royal Palace is worth a visit.

How to Reach City Palace

74.77% of people prefer to travel by car while visiting City Palace