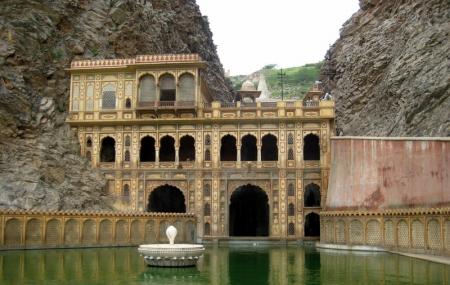 The Galta Monkey Temple is an important religious site in Jaipur. It attracts several Hindu devotees every year. It is also a place where you can see several aspects of ancient Hindu culture and tradition depicted in the art. It was built by the courtier of Maharaja Sawai Jai Singh II, named Diwan Rao Kriparam.

The central and chief temple is the Temple of Galtaji. Adjoining the Temple of Galtaji is the temple of Balaji, and the Temple of Surya. The Temple of Galtaji features beautiful and extensive crafting of pink sandstone, and bears numerous courtyards having the traditional Rajasthani roofs and sculptured pillars along with painted walls. The adjoining premises of the temple also include several natural water springs, which are regarded holy and as blessings. The spring water is collected in reservoirs called Kunds, to allow the visitors to take holy baths as religious rituals. The GaltaKund is regarded as the most holy among the baths.

The reason it is called the Monkey temple is due to the scores of monkeys that inhabit the area in and around it. It isn’t that these monkeys have recently started living here though. There is evidence of these monkeys having been here and the temple being called the monkey temple even in ancient times. This certainly makes it an impressive place to visit.

How to Reach Monkey Temple