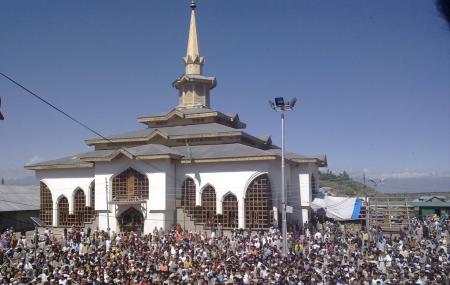 A shrine that is revered by Hindu and Muslims, Charar-e-sharief is the town of the mystical saint Sheikh Nooruddin. Painted by various dramatic colours of suffering and miracles, the Sheikh wanted this town to be a model that lived on moral values. It is must that you visit Charar-e-sharief to experience the composite culture of Jammu and Kashmir.

Saint Noorudin was born as NundReshi or Sahzanand. His story is full of wonders. As a new born infant he did not breast feed until a pious Yogini called Lal Ded appeared at their house and fed him. She left the house after declaring that he was going to be her spiritual heir.

The saint united the people in the valley without any religious divides. He taught through poetry, through music that God is one, no matter which religion we follow, we have the same parent.

This 600 year old shrine is considered one of the sacrosanct Muslim shrines in India. Unfortunately, it was burned down in 1995 by Mujahideen who attacked the shrine. The whole town was engulfed in the fire along with the Durgah.

This town symbolizes so many things. It symbolizes the Hindu Muslim ties in the valley, the mystical, poetic culture of Kashmir and the violent insecurity in the state due to Mujahideen-Military clashes.

For all this symbols and many more, Charar-e-Sharief is a unique destination that should be a part of everyone’s visit to the virgin mystical Kashmir.

Love this? Explore the entire list of places to visit in Jammu before you plan your trip.

Fancy a good night's sleep after a tiring day? Check out where to stay in Jammu and book an accommodation of your choice.

People normally club together Pathar Masjid and Hari Parbat Fort while planning their visit to Charar-e-sharief.

People also prefer to start their day with Charar-e-sharief.