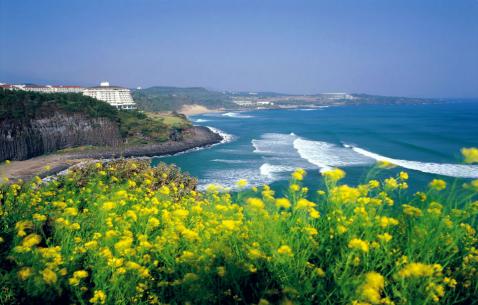 Jeju City is on the island of Jejudo. Though attempts by the locals to turn the island into the 'Korean Hawaii' haven't quite been successful (mostly due to the sheer difference in climate and landscape), the island is nevertheless a tourist bonanza. Combining natural beauty, rustic rural culture, and blatant tourist trapping, Jejudo covers a surprisingly diverse range of activities.

For the most part, Jeju City is the home base for such tourist hopping. Though the city does have tourist attractions of its own, the best tourist attractions are mostly found outside the city. The city is directly across from the other major urban area on the island, Seogwipo.

The city's location is deeply tied to the island's history. For example, the Samseonghyeol, three holes from which the three ancestors of the clans are said to have arisen, is downtown. The city's main income seems to come from tourism. The countryside subsists on both tourism and agriculture.

Attraction-wise, the main offering is the island's central extinct volcanic mountain. It has trails all over it, and is usually crowded with hikers. Other places to visit are more niche - such as the Teddy Bear Museum, the Jeju Mysterious Park, Hallim Park and Dragon Head Rock. You can take a bus, and hop a ferry over to Udo island. There's a miniature architectural wonder park called Mini Land, and a museum dedicated to constructs made of glass.

Culturally, the best place to start is the Folk and Culture museum. It gives you a decent idea about the island's character. A common sight outside the city, and near the coast, is of the "haenyo" or "woman diver" (women dominate the seafood industry on the island)

Though shopping and nightlife have some presence in the city, it's not on the main list of things to do in Jeju. The public casinos are quite popular though. All things considered, a visit to Jeju won't be like a like an island stop that you might be used to. The attractions are all eclectic and target very niche interests.

Essential travel information and Jeju tips for your visit

Plan Your Trip To jeju

The best tours and activities in the city, guided by experts to give you a local insight to the best of Jeju