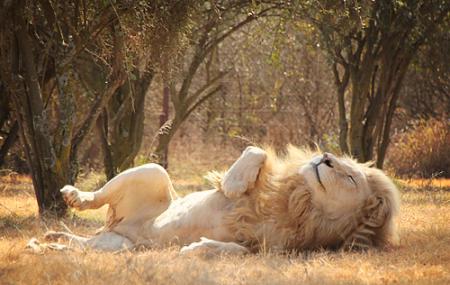 The chief attraction of the Park is the conservation and protected upbringing of the almost extinct white lion species and the yellow lions of Africa, of which over 80 reside in the park. Besides the lions, the Park is also home to numerous other smaller carnivores such as the spotted hyenas, brown hyenas, and wild dogs. The species of black backed jackals and numerous varieties of antelopes are also bred and cared in protective enclosures. The carnivorous wildlife are placed in separate sections of the open grounds of the park, and the vegetarians such as the antelopes of blesbok, the Gnu, impala, and  gemsbok are grouped together with zebras in non preying grounds.

The international zoologist Kevin Richardson is the functional owner of a famous programme of the park named Kingdom of the White Lion. The Lion Park is often regarded as a special performance venue by the international performers and singers, especially during the inaugural theme songs of world cup tournaments.

How to Reach Lion Park

Love this? Explore the entire list of places to visit in Johannesburg before you plan your trip.

Fancy a good night's sleep after a tiring day? Check out where to stay in Johannesburg and book an accommodation of your choice.

People normally club together Sterkfontein Caves and Satyagraha House while planning their visit to Lion Park.