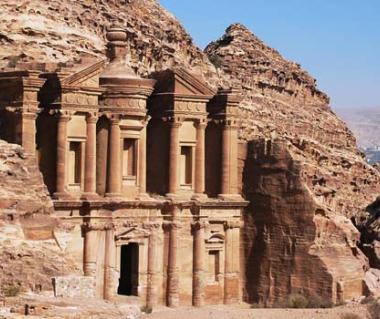 Plan Your Trip To Jordan

Places to visit in Jordan

For many people Jordan begins and ends with the magical ancient Nabataean city of Petra. And it's true, Petra is without doubt one of the Middle East's most spectacular, unmissable sights, battling it out with Machu Picchu or Angkor Wat for the title of the worlds most dramatic 'lost city'. From the majesty of Petra to the rock formations of the Wadi Rum and eerie waters of the Dead Sea, Jordan is a place steeped in history and blessed with great beauty.

Air :- The national airline, Royal Jordanian , is well run and has direct flights to most major cities in Europe and all over the Middle East. Royal Wings ), a subsidiary of Royal Jordanian, has smaller planes for short flights from Amman to Tel Aviv (daily), Aqaba and Sharm el-Sheikh (four weekly).

Jordan has a typically Middle Eastern climate in which summers are very hot, with temperatures reaching up into the forties Celsius. If you are not adversely affected by heat it is still worth considering a trip at this time as you will have sights like Petra almost to yourself. Spring and autumn are the best times to travel as the days are warm, with temperatures into the high twenties Celsius with cool nights.

What to see and adventures :-

Yet there's so much more to see in Jordan - ruined Roman cities, Crusader castles, desert citadels and powerful biblical sites: the brook where Jesus was baptised, the fortress where Herod beheaded John the Baptist, and the mountain top where Moses cast eyes on the Promised Land. For adventure lovers, there’s horse riding, 4x4 safaris, rock climbing and hiking. For taking it easy, nothing on earth compares to the Dead Sea and the Red Sea, with their many spa facilities.

As one of the largest producers of olives in the world, olive oil is the main cooking oil in Jordan. Herbs, garlic, spices, onion, tomato sauce and lemon are typical flavors found in Jordan. The most common and popular appetizer is hummus, which is a puree of chick peas blended with tahini, lemon, and garlic. Ful Medames is another well-known appetizer.