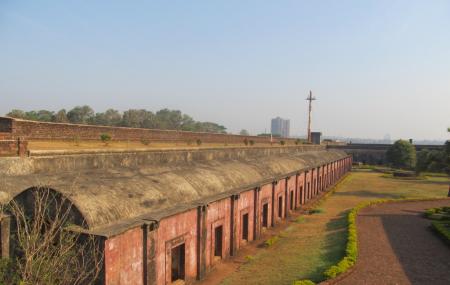 St. Angelo Fort which is also known as Kannur Fort or the Kannur Kotta is a fort in Kannur region of Kerala and faces the Arabian Sea. The fort juts out from a cliff.

This fort was built by the first Portuguese viceroy of India, Dom Francisco De Almeida in 1505. This was attacked by a local ruler named Zamorin but he could not capture it. In 1509, when Afonso De Albuquerque came as the new viceroy, Dom Francisco refused to recognize him and kept continuing his rule on India. This is how the naval battle of Diu started and later Dom Francisco lost it and thus was replaced by Afonso. Later in 1663, the Dutch captured the fort. They were the ones who renovated the fort mostly like how it is now. They built the bastions Hollandia, Zeelandia and Frieslandia. The Dutch sold this to King Ali Raja of Arakkal in 1772. Later again this fort was taken over by the British in 1790 when they captured India and used this as their major military holding in the south. This was till 1947 till our country got independence.

After independence and till now this fort stands amidst peaceful and serene surroundings with coasts and bays on all sides. This fort made of laterite soil is so strong that it has withstood the attacks of time quite well and still stands strong, except a few corrosions. It is a triangular fort and is surrounded by a beautiful garden. The view from this fort on the cliff is just mind-blowing. The only people who come to the fort are the daily visitors and the rest of the times, it lies asleep amidst the cover of silence. The prison rooms still get fresh air like none of the rooms here. This was where the prisoners were locked up in the dark and given food once in a day through this same window which lets cool wind to come in from the sea.

This is a protected site by the Archeological Survey of India and they are the ones who maintain the garden and the fort as well. This is the most important attraction in the list when you visit Kannur.

How to Reach St. Angelos Fort

Love this? Explore the entire list of places to visit in Kannur before you plan your trip.

Fancy a good night's sleep after a tiring day? Check out where to stay in Kannur and book an accommodation of your choice.

95% of people prefer to travel by car while visiting St. Angelos Fort