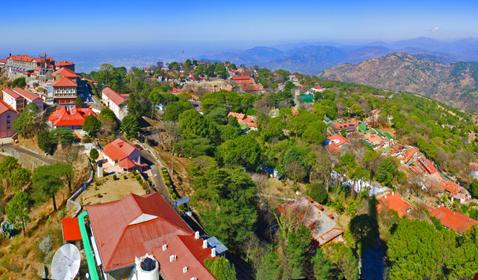 Some things like wine only get better with time. Kasauli, the charming little hill station studded in the upper side of Himachal Pradesh and at an angle distance of Chandigarh, seems to be one of those preserved places. The cutting and meandering roads of Kasauli slither through the city and offer magnificent views, usually shrouded in a blanket of fog and mist. A bird's eye view from the top of Kasauli gives a peek to the lower plains of Punjab and Haryana. It looks absolutely stunning at night when the mantle of darkness peels it over to unravel a splendid spectacle of the twinkling stars. Kasauli is one of those places which has encrusted and perpetuated its rich history and inklings from the colonial era. It is aptly displayed in the grandeur of its churches and chapels. There’s tall drenched trees, misty fresh mountain air and wobbly criss-cross roads, which give you the peaceful feels. The place conceals in itself a lot of charm and mysterious aura. It’s just as perfect to explore on foot as it is to roam around on a bike. There’s the insoluble woodlands where one can get a first hand experience of the exotic enchantress that Nature can be.

It might take you aback to know that Kasauli was flocked and inhabited initially because of a spring which flowed perennially. The Hindus believe that the land of Kasauli came into existence when Lord Hanuman rested his one foot on this land enroute the Dronagiri Hills. This place has a calming and serene existence.

Kasauli hill station is now a cantonment area, with the royal touch of the colonial times. The art and culture is still largely influenced and pertains to the colonial times. The architecture and the buildings are still largely styled from the British era. It was a hub of the Britishers in the 19th century and Indians were not allowed to even stroll by in the Mall road. But things took a different angle from World War II times, when the generals went off to the war. It’s a quiet town and thus, perfect for those looking for artistic pursuits.

The weather of Kasauli stays pleasant throughout the year. It is thus perfect for families, tourists and travellers to experience and visit, at any time of the year.

Apart from the much revered natural allure of this pretty hill station, it might interest you to know that the oldest brewery of the continent of Asia, is infact in this little town. The Kasauli brewery prides itself on having sustained the spokes of time and has well maintained its equipments which were imported from England and Scotland.

Kasauli forms for the perfect weekend getaway for the people living in the plains nearby as well as for people looking to tour the place and explore it. It reflects upon the old worldly charm of Himachal with cottages, trees and the inviting never ending long paths.

Essential travel information and Kasauli tips for your visit