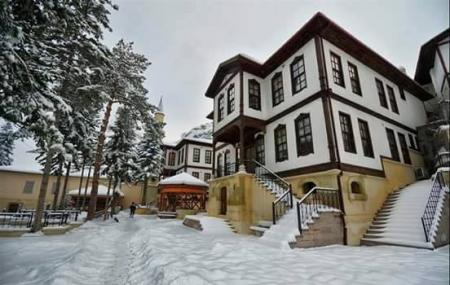 The Hz. Pir Seyh Saban-i Veli Kulliyesi is a complex that was built by Seyyid Sunnah Efendi before 1490 M. The complex includes Dargah houses (the two mosques were built by Azdavay Mahmut Pasha from the period of 1318 to 1900), a tomb that dates back to the time frame of 1020-161, a Library, the Asa Suyu and a gorgeous fountain that was built on the first day of Recep’s moon in 1318.

Today, the timeless architecture of the place and its spiritual ambience is what pulls tourists from all over the world. The dervish was repaired during the 13th and 19th century and the mosque was later converted to a complex. The highlight of the place is the personal collection of Shaban-i Veli showcased at AzdavaylÃÃÃ‚„Â± Mahmut Pasha. The main mosque of the complex is an architectural marvel in itself- the ceiling, Minbar and floor is made entirely from wood. The Altar is adorned with Gypsum and is the crown jewel of the place.

The Asa Suyu shows a beautiful rock structure with taps that offer water to the visitors. It is said that this water tastes exactly like the water from Zemzem (the well at Masjid al-Haram in Mecca). The Museum is a treasure in itself and includes historic manuscripts, building section with Quran writings, candlesticks, works of Kastamonian calligraphers, charity stones and beautiful religious items. When here, don’t forget to pay your respects at the Tomb of Sheikh Sha'ban-i Veli Hz that was built in 1612. The intricate wood work on the tomb is a beautiful addition. What truly makes the whole complex worth the visit is its history and its spiritual ambience.

Love this? Explore the entire list of places to visit in Kastamonu before you plan your trip.

Fancy a good night's sleep after a tiring day? Check out where to stay in Kastamonu and book an accommodation of your choice.

84.21% of people prefer to travel by car while visiting Sheikh Shaban-i Veli Mosque