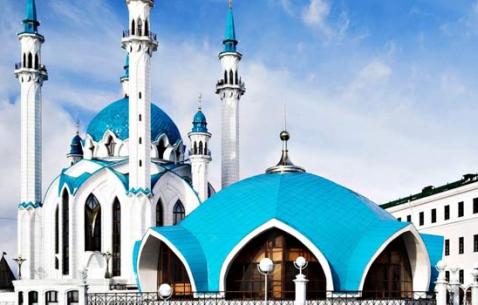 Kazan (Russian: Каза́нь; IPA: [kɐˈzanʲ]; Tatar: Казан, Qazan) is the capital and largest city of the Republic of Tatarstan, Russia. With a population of 1,143,535, it is the eighth most populous city in Russia. Kazan lies at the confluence of the Volga and Kazanka Rivers in European Russia. The Kazan Kremlin is a World Heritage Site. In April 2009, the Russian Patent Office granted Kazan the right to brand itself as the "Third Capital" of Russia. In 2009 it was chosen as the "Sports capital of Russia" and it still is referred to as such. The city hosted the 2013 Summer Universiade, 2014 World Fencing Championships, the 2015 World Aquatics Championships, and one of the host cities for the 2017 FIFA Confederations Cup and the 2018 FIFA World Cup. In 2015, Kazan was visited by 2.1 million tourists, which is a 20% increase in comparison with 2014. The Kazan Kremlin was visited by 1.5 million tourists in 2015 and hotel and entertainment complex with aquapark called "Kazan Riviera" was visited by 1 million tourists.

Kazan is a largest and capital city of republic of Tatarstan in Russia. Kazan is 8thmost crowded city of Russia with 1143535 populations. This city is situated at the meeting point of Rivers Kazanka and Volga in the European Russia. This area is extended up to 515.8km².

Plan Your Trip To Kazan

The best tours and activities in the city, guided by experts to give you a local insight to the best of Kazan