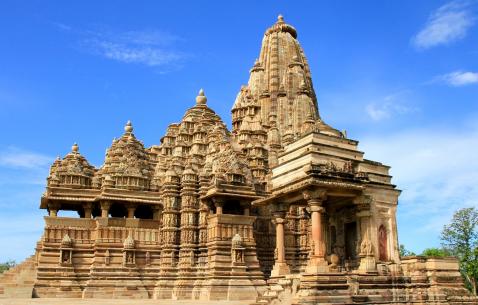 The temples remained unnoticed for a very long time after the fall of the Chandela dynasty. They were surrounded by date palms trees and that is how this place got its name after the Indian name of these trees, ‘Khajur’.

T.S.Burt, a British historian re-discovered the temples in 1838. Even though the temples were taken care of by the locals, only 22 of the original 85 temples had survived foreign invasions and natural calamities.

Khajuraho is a marvellous example of Indian medieval architecture. The temples are made out of sandstone. They are held together by mortise and tenon instead of mortar while using gravity as an important force. This shows how architecturally evolved the Chandela civilization was.

It is believed that the Chandelas might be followers of the Tantrism, a Hindu cult that believed that earthly gratification is a way of getting closer to the divine power. Another theory is that the sculptures were a way of introducing young men who had returned from hermitages to the art of Kama sutra.

Apart from the evolved architecture, the structures comment on the social setting of the area during those times. No matter which theory is to be believed, it is clear that this civilization was a highly developed, mature one which indulged in earthly pleasure with a lot of passion and creativity.

The temples are divided into three sites – eastern, western, and southern. The western area has the largest and richest temples of all the lot. All the temples are open from early morning to dawn. A light and sound show of an hour in the evening is a special highlight not to be missed.

Khajuraho is a glimpse into the past of India, an India that perhaps lived with lesser barriers and a lot of sexual freedom. No wonder it is in the top ten places in India itineraries of many who visit India. And did we forget to mention that it is also an UNESCO world heritage site?

Essential travel information and Khajuraho tips for your visit

Plan Your Trip To Khajuraho

The best tours and activities in the city, guided by experts to give you a local insight to the best of Khajuraho