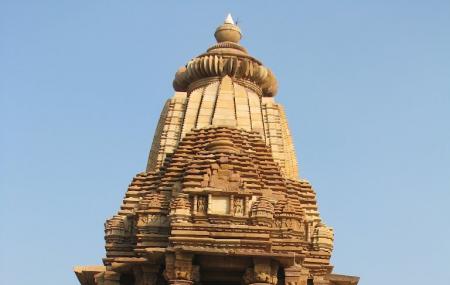 This temple is one of the temples in the southern chain of the Khajuraho Monuments. This was built during the reign of the Chandelas during the 11th century. The name is so derived from ‘chaturbhuj’, which means ‘one with four arms’. This is so with the presiding duty Lord Vishnu who has four arms. This temple is also called ‘Chattarbhuj’ given the name of the district in which it is situated.

Like the other temples here this is also divided into three parts, the porch, sanctum, and the innermost sanctum. This place is beautifully carved with motifs of women and their partners in love making postures. The walls also have sculptures of tigers, demi- gods and other diving digpalas.

The inner sanctorum has a nine leg structure with four arms. The two shorter arms depict delight and fearlessness and the other two has conch and a wheel. Apart from this main idol there is another idol of the lord Vishnu in a Narasimha Avatar. There is another idol of Lord Shiva in the Ardhanarishwara (half man-half woman) incarnation.

The controversy still has continued that it was originally a temple dedicated to Lord Shiva which has now become that of Lord Vishnu.

How to Reach Chaturbhuj Temple

Love this? Explore the entire list of places to visit in Khajuraho before you plan your trip.

Fancy a good night's sleep after a tiring day? Check out where to stay in Khajuraho and book an accommodation of your choice.

People normally club together Beejamandal Temple and Dulhadev Temple while planning their visit to Chaturbhuj Temple.