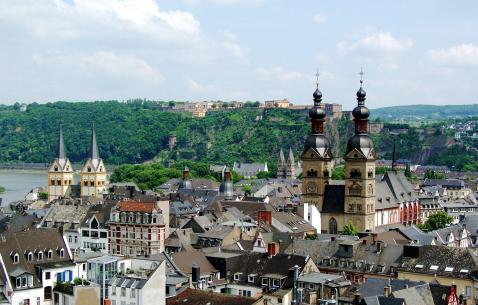 Situated on both the sides of River Rhine at its confluence with Moselle River, Koblenz is a picturesque garden town in Germany. The Abundance of medieval buildings, historical monuments and other places of cultural heritage will never disappoint you for including Koblenz in your itinerary planners.

The earliest fortifications in the region dated back to 1000BC. But Aachen had proper contact with other places only after the troops of Julius Caesar built a bridge linking the town to Andernach. It was subjugated by the Franks after the fall of Roman Empire, and was turned into a royal seat. Koblenz prospered from the beginning of 13th century until the Thirty Years War led to the city’s decline. After the fall of Bastille in 1789, the city became a meeting point for French emigres. In the early 19th century, Russians invaded the place, but was taken over by the French after the World War I and was rebelled by the Germans. The city faced massive destruction during the Second World War and was rebuilt in the prospects of better living and tourism development.

Koblenz stands out from the other cities in Rhineland-Palatine region whit an ideal location amidst two rivers and four low mountain ranges. The city emanates a radiant atmosphere with its cushy lanes, narrow alleyways, and pleasant promenades along the waters.

The joys of visiting Koblenz are not just confined to the sightseeing places. There are a lot of activities to do in the city as an enthusiastic tourist. Visit the tourist information centre to get tourist brochures and maps of the city. Take a cable car ride up the Ehrenbreitstein Fortress and embrace a magnificent view of the town from an altitude. Or if you’re a shopaholic, find some nice souvenirs and stuff in the marketplace shops to take back to your hometown or take a nice coffee break in one of those cosy sidewalk cafes.

Also, try to take part in one of the wine tasting tours or explore the city and its surroundings on bikes, along with the services of a credible tour guide. So for your next holiday, include Koblenz in your vacation planner. And while you’re here, make sure to treat your body and soul with all the things to do in the city and make great memories.

Essential travel information and Koblenz tips for your visit

Plan Your Trip To Koblenz

The best tours and activities in the city, guided by experts to give you a local insight to the best of Koblenz