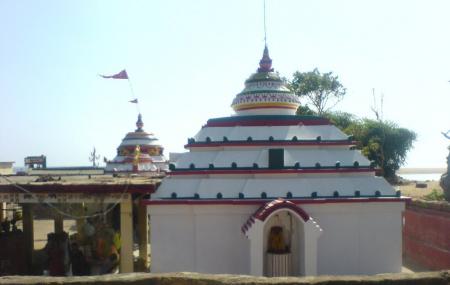 The Temple of Ramchandi is a beautiful tourist spot in the mouth of the Kushabhadra River. The temple is not very important but Ramchandi is the main deity of Konark. This temple is situated on the Marine Drive Road few kilometers from Konark on your way from Puri. It is even older than the Sun Temple. It is one of the most important Sakta pithas of Orissa.

The temple is a cute little one half hidden behind picturesque casuarinas plantation. There is an idol of Mother Ramchandi seated on a lotus. This place was not accessible by any outside visitors but was only an important place for the local devotees before the Marine Drive Road was built. Apart from this, this place is so calm and beautiful that it attracts many young lovers, groups and picnickers.

There is very popular story about this temple that is known to almost all locals. The rebel Brahmin Kalapahada who granted Islam vowed to destroy all temples. He moved forward to the Ramchandi Temple after destroying a few other temples. It is said that when he was just about to enter the temple, Goddess Ramchandi took a disguise of a maid and told him to wait till she brings some water for the Goddess. Kalapahada started waiting anxiously to get some cold water but got frustrated when she did not return for a long time. As he moved into the temple he found the place of the idol empty and thought that the maid must have stolen it. He went towards the river in anger and found it brimming with water and the idol floating in the middle. He was thus unable to take the idol. That very night Mother Ramchandi came in the dreams of a priest and ordered him to build a temple of her in the beautiful place on the banks of the Kushabhadra River.

How to Reach Ramchandi Temple

Love this? Explore the entire list of places to visit in Konark before you plan your trip.

Fancy a good night's sleep after a tiring day? Check out where to stay in Konark and book an accommodation of your choice.

People normally club together Kuruma and Raghurajpur Artist Village while planning their visit to Ramchandi Temple.